International marketing can be a tricky business. With the increase in global trade, international companies cannot afford to make costly advertising mistakes if they want to be competitive and profitable. Understanding the language and culture of target markets in foreign countries is one of the keys to successful international advertising. Too many companies, however, have jumped into foreign markets with embarrassing results. Out of their blunders, a whole new industry of translation services has emerged.

The value of understanding the language of a country cannot he overestimated. Translation mistakes are at the heart of many blunders in international advertising. Since a language is more than the sum of its words, a literal, word-by-word dictionary translation seldom works. The following examples prove this point. Otis Engineering Company once displayed a poster at a trade show in Moscow that turned heads. Due to a poor translation of its message, the sign boasted that the firm’s equipment was great for improving a person’s sex life. The Parker Pen Company suffered an embarrassing moment when it realized that a faulty translation of one of its ads into Spanish resulted in a promise to “help prevent unwanted pregnancies”.

Automobile manufacturers in the United States have made several notorious advertising mistakes that have been well publicized. General Motors learned a costly lesson when it intro ­duced its Chevrolet Nova to the Puerto Rican market. Although “nova” means “star” in Span ­ish, when it is spoken, it sounds like “no va” which means it doesn’t go. Few people wanted to buy a car with that meaning. When GM changed the name to Carrie, sales picked up dra ­matically. Ford also ran into trouble with the name of one of its products. When it introduced a low-cost truck called the “Fiera” into Spanish-speaking countries, Ford didn’t realize until too late that the name meant “ugly old woman” in Spanish. Another American auto manufacturer made a mistake when it translated its Venezuelan ad for a car battery. It was no surprise when Venezuelan customers didn’t want to buy a battery that was advertised as being “highly over ­rated.”

Airline companies have also experienced problems of poor translation. A word-by-word translation ruined a whole advertising campaign for Braniff Airlines. Hoping to promote its plush leather seats, Braniffs ad urged passengers to “fly on leather.” However, when the slo ­gan was translated into Spanish, it told customers to “fly naked.” Another airline company, Eastern Airlines, made a similar mistake when it translated its motto, “We earn our wings daily” into Spanish. The poor translation suggested that its passengers often ended up dead. 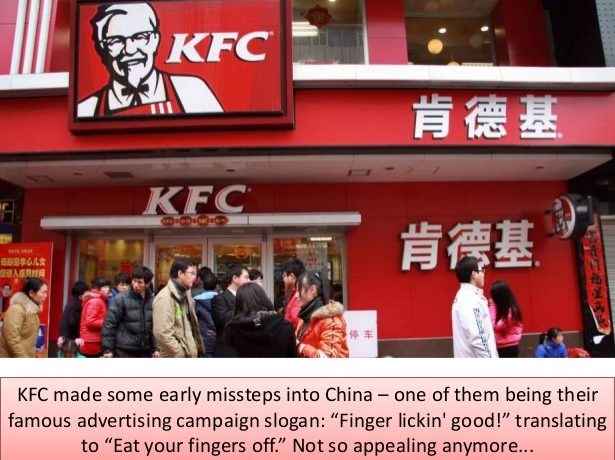 Marketing blunders have also been made by food and beverage companies. When translated into German, Pepsi’s popular slogan, “Come Alive with Pepsi” came out implying “Come Alive from the Grave.” No wonder customers in Germany didn’t rush out to buy Pepsi. Even a company with an excellent international track record like Kentucky Fried Chicken also suffered from faulty translation. A lot of sales were lost when the catch phrase “finger lickip good” became “eat your fingers off” in the Chinese translation.

A manufacturer of one laundry detergent made an expensive mistake in a promotional cam ­paign in the Middle East. The advertisements showed a picture of a pile of dirty clothes on the left, a box of the company’s detergent in the middle, and clean clothes on the right. Unfortu ­nately, the message was incorrectly interpreted because most people in the Middle East read from right to left. It seemed to them that the detergent turned clean clothes into dirty ones.

Cultural oversights can be disastrous

Successful international marketing doesn’t stop with good translations–other aspects of culture must be researched and understood if marketers are to avoid blunders. When marketers do not understand and appreciate the values, tastes, geography, climate, superstitions, level of literacy, religion, or economic development of a culture, they fail to capture their target mar ­ket. For example, when a popular American designer tried to introduce a new perfume in the Latin American market, the product aroused little interest and the company lost a lot of money. Ads for the new fragrance highlighted its fresh camellia scent. What marketers had failed to realize was that camellias are traditionally used for funerals in many South American countries.

Procter and Gamble has been successful in marketing its products internationally for many years. Today, overseas markets account for over one third of its sales. However, the company’s success in this area didn’t happen overnight. Procter and Gamble initially experienced huge losses because marketing managers did not recognize important cultural differences. For instance, when P&G first entered the Japanese market with its popular Cheer laundry detergent, most Japanese housewives weren’t interested. The promotional campaign that emphasized Cheer as an effective “all temperature” detergent was lost on the Japanese who usually wash clothes in cold water. Although the ad had been quite successful in the United States where clothes are washed in all temperatures, it fell flat in Japan. All of this could have been avoided if P&G marketers had done more preliminary research before launching the campaign. Once P&G changed its strategy and promised superior cleaning in cold water, sales for Cheer picked up dramatically.

The use of numbers can also be a source of problems for international marketers. Since every culture has its own set of lucky and unlucky numbers, companies need to do their homework if they want to avoid marketing blunders. A US manufacturer of golf balls learned this lesson the hard way when it packaged its product in groups of four for export to Japan. The company couldn’t figure out why the golf balls weren’t selling well until it realized that in Japanese the word for the number four also means death. In Japan four and nine are very unlucky numbers which should be avoided by marketers.

Even illustrations need to be carefully examined. A picture that is culturally offensive can ruin an advertisement even if the written message is properly translated. McDonnell Douglas Corporation made an unfortunate error in an aircraft brochure for potential customers in India. It included a picture of men wearing turbans, which was not appreciated by the Indians. A company spokesman reported, “It was politely pointed out to us that turbans were distinctly Pakistani Moslem.” The artist for the ad had used an old National Geographic magazine to copy the picture.

Having awakened to the special nature of international advertising, companies are becoming much more conscientious in securing accurate translations. They are also becoming much more sensitive to the cultural distinctions and variables that play such an important role in any international business venture. Above all, the best way to guard against errors is to hire trained professional translators who thoroughly understand the target language and its idiomatic usage. These translators should be very familiar with the culture and people of the country, and have a grasp of the technical aspects of the industry.

Many international companies are using a technique called “back translation,” which greatly reduces the possibility of advertising blunders. The process of “back translation” requires one person to translate the message into the target language and another person to translate the new version back into the original language. The purpose is to determine whether the original material and the re-translated material are the same. In this way companies can ensure that their intended message is really being conveyed.

Effective translators aim to capture the overall message of an advertisement because a word-for-word duplication of the original rarely conveys the intended meaning and often causes misunderstandings. In designing advertisements to be used in other countries, marketers are recognizing the need to keep messages as short arid simple as possible and to avoid idioms, jar ­gon, and slang that are difficult to translate. Similarly, they avoid jokes, since humor does not translate well from one culture to another. What is considered funny in one part of the world may not be so humorous in another. The bottom line is that consumers interpret advertising in terms of their own cultures. As the global marketplace opens up, there is no room for linguistic or cultural blunders.