Nissan is a famous automobile manufacturing company which was founded in 1933. After the Second World War, Nissan expanded its operations globally. Nissan was very well known for its advanced engineering and technology, plant productivity and quality management. However, during the previous decade, Nissan management has emphasized on short-term market share growth, instead of profitability or long-term strategic success. Nissan’s designs had not reflected customer opinion. In addition, Nissan managers tended to put retained earnings into keiretsu investing (equity of suppliers), rather than reinvesting in new product designs as other competitors did. These inappropriate strategies combining with the Asian crisis influence on a devaluation of the yen led Nissan to the edge of bankruptcy. Nissan was in need of a strategic partner that could lend both financing and new management ideas to foster a turnaround. Furthermore, Nissan sought to expand into other regions where it had less presence. In order to turn around as soon as possible, Nissan found an opportunity and created a strategic alliance with Renault who was also looking for a partner to reduce its dependence on the European market and enhance its global position.

In 1999 Nissan was incurring losses in seven of the prior eight years, which led to the hiring of a new CEO, Carlos Ghosn, being the first non Japanese CEO, had to face a huge culture clash (French-Japanese) so that he could be able to redefine the company’s structure to ultimately enhance its performance in a maximum period of two years. Although he intensively addressed cultural issues, taking under consideration the specifications about Japanese culture norms, he also incurred few risky decisions that could have worked against the process, risking the employee’s engagement process. 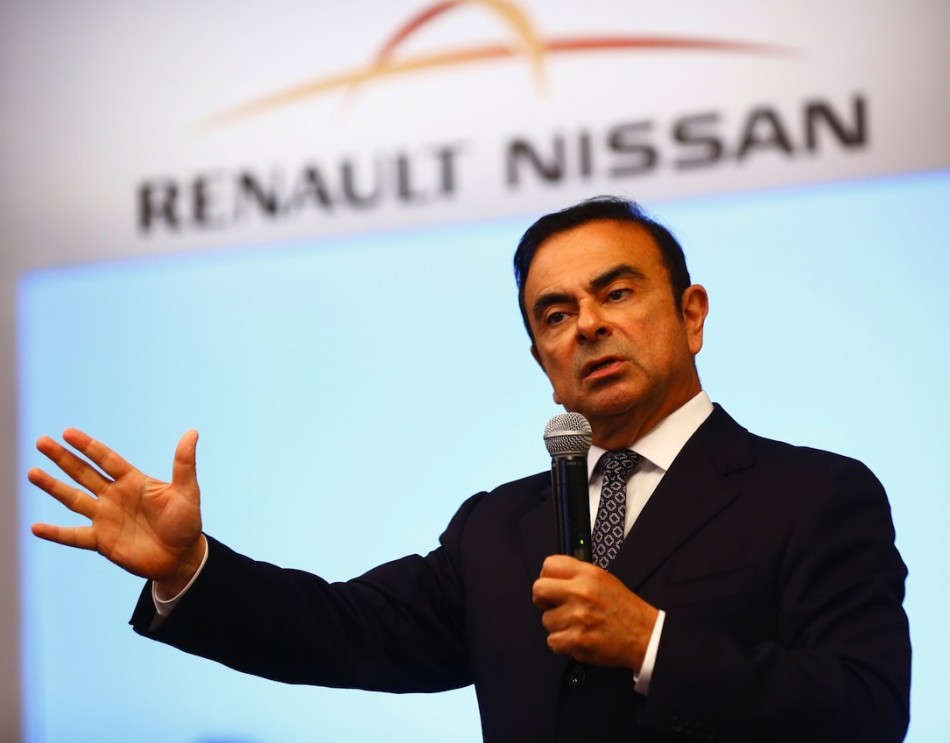 With the arrival of a new CEO, it is never clear what is going to happen for sure. When they first start they are often tended to initiate restructuring processes in the company, focusing too much in short term objectives by reducing costs to turnaround the firm. With that, they are usually just addressing issues around short term financial results, which may seem to resolve the problems, but 3, 4, 5 years after, the firm will be back to the same starting point again, since it didn’t made a plan for linking the short term objectives with a long term strategy progress. This happens because the world is always evolving and changing, and so the firm should prepare for it along the way, pursuing a long term strategy.

With the new CEO being the first foreigner leading the firm, it is more than natural that some differences would arise especially at a cultural level, since Japanese have very particular social and professional norms. There were some specific national cultural differences that were pronounced between Nissan organization and Ghosn, but not in a way that made it too difficult to move forward. In the other hand, the Japanese basis of operational efficiency was aligned towards consciousness and cooperation, crucial in any company worldwide. First, Japanese professionals tended to avoid mistakes at all costs in order to promote their career growth. This type of mind set had to be faced with a change in the way employees individually perceived their tasks, because it was working against Nissan, since decisions were taking too long to be made. Ghosn implemented a strategy that would engage the employees in a way that they would have such a great sense of belonging to what was being done, inspiring them to achieve high levels of motivation and confidence when performing their functions at Nissan. Strictly related to the decision making process previously mentioned, the second culture clash that can be acknowledged as a difference towards Ghosn is responsibility and accountability. Due to the Japanese culture of protecting career advancement, there were common situations of unclear responsibility and accountability allocation, which goes against trust and reliability principles. Ghosn found very important to account every single employee for its own actions, research reports and recommendations, which in turn made Nissan’s employees more accurate and concerned about their performance. Because they are being closely monitored, having to respond and face the consequences of their own actions and not being “hidden” among a larger group of peers where everyone is responsible, but in the end no one is accountable.

Starting with the Japanese concept of seniority which frames the determining factors of how a Japanese employee moves up the career ladder (age, education level and length of service to an organization), it is clear that this concept went against the new CEO principles, whose defended that promotions should be allocated accordingly to the level of employee’s practical skills and performance contribution. This culture change created a paradox between seniority and incentives concept, because by giving promotion incentives to the ones who better perform and contribute to the development of the company, it is in turn naturally occupying the new position that a longer-service employee waited for so long. Even though it is better if the best performers have positions with more responsibility, it inevitably generates various unproductive actions (intrinsic risk associated), in this case some problems regarding lack of cooperation. This lack of cooperation can be seen as an important resource in helping the young managers develop their professional experience. It can also act as an important form of feedback based on how well Ghosn faced this test of authority.

The lifelong employment represents the second Japanese culture characteristic that caused some resistance to change. Nowadays this reality is changing as the world gets more flat and companies become each time more internationally ruled. As the term reflects, the Japanese were accustomed towards the notion of job security for the duration of one’s life, (aligned with the seniority term mentioned previously), which means that when Ghosn actually fired 21,000 employees (closing five factories) it was a huge let down, even countrywide, since he was criticized by the media, industry analysts and also the government. Even though the headcount reduction was not only based in firing employees, but also in pre-retirement programs, retirements and selling non-core businesses, it still represented a considerable risk in terms of the in progress culture restructuring. This firing measure could have delayed the evolution of the decision making process because Nissan’s employees could have started to feel their job was also at risk, starting to avoid making risky decisions to avoid giving reasons for being fired. Nevertheless, it had to be done in order to achieve better results.

Although Ghosn was very criticized with the measures he undertook, the fact that the government offered subsidies and programs to help affected workers may have helped in stabilizing the harmony around the foreigner CEO. The culture engagement was what brought alignment to the company helping Ghosn to achieve what he proposed to, with the Japanese culture always as a basis and then with some incremental attitudes towards incentives and decision making capabilities, enhancing the overall performance of the process.

All above mentioned Japanese business culture were different with what Ghosn faced on his previous career. However, with the sufficient global leadership capacity, Ghosn had a belief that €•cultural conflict could provide opportunity for rapid innovation if paced and channeled correctly. In order to deal with the cultural differences, Ghosn accepted the different Japanese culture instead of trying to impose his culture on Nissan staffs. Ghosn was the first manager to walk around the entire company and meet every employee. Through this way, Ghosn expressed his attitude toward cultural respect so that closed the distance between employees and him.

Besides the Japanese cultural norms, there were also procedural norms at Nissan which should be contended with. These procedural norms made communication between the layers of the organization difficult which led to no shared vision or common long term plan. For Ghosn, communication of company direction and priorities is the only way to get truly unified effort and buy-in. This is also common agreed in the field of strategy execution. One of the main reasons why strategy failed to implement is the lack of communication. Without communication, staffs do not know what the company‘s plan is; they do not know how their day-to-day tasks contribute to the company‘s success either.

In order to build a communication climate at Nissan, Ghosn had long discussions with several hundred managers to discuss their ideas for turning Nissan around. This made middle and lower management feel that they also had responsibility on bail out the company and the top executives considered their suggestions or ideas important. After these interviews, he developed a program for transformation which relied on the Nissan people to make recommendations rather than outside consultants. This action motivated employees to participate in the action of turnaround the company, then strengthened confidence in the company. Ghosn not only overcame the Japanese cultural obstacles, but also successfully adopted the Japanese culture as a helper to achieve the success, as what he said “When you get a clear strategy and communicate your priorities, it‘s a pleasure working in Japan. The Japanese are so organized and know how to make the best of things. They respect leadership.”

At this time there was a gap between the strategy implementation and the follow up afterwards, which is not common given the country’s national culture. This happened because Nissan’s operations were not synchronized with the top management while top management strategies were not passed through the operational departments. This meant that the middle and lower managers had no precise idea where the company was moving towards. On the other perspective, top management wasn’t getting functional information about the customers and the way its overall strategy was being executed. As Ghosn realized this misalignment he implemented a very good program to turnaround this structural problem by creating cross-functional teams (CFTs) with in-house line managers. The CFTs were created to take action in a wide range of the management divisions including restructuring. What is relevant to highlight is that this groups started being the connection point between strategy development and operations, since they had to prepare recommendations to the firm’ top managers based in accurate analyzed data gathered. The managers were only used to focus in their specific areas, narrowing their knowledge and view of the firm business, but with Ghosn’s changes they could actually take part on the rebuilding of Nissan’s strategy, being so much closer to the top management. There is nothing more motivating than understanding why and what you are doing, and this is why motivation always plays such a crucial role, especially when they felt a sense of responsibility and belonging for turning Nissan around.

An important measure undertaken by Ghosn that enabled Nissan to regain billions was by redirecting the investment with the keiretsu partnership to invest in debt servicing and new product development. This new resource allocation plus the reduction of costs with suppliers enabled Nissan to be substantially more efficient in its cost structure. Ghosn also changed Nissan’s hiring decisions, being specifically looking for motivated outside managers to continue the process and hoping to create animosity among Nissan’s employees.

Though it was not the winner in the race to the global auto sweepstakes, on October 18, 2001, Nissan’s CEO Carlos Ghosn rose to announce the return of the Japanese company on the road to recovery, a chapter in the history of corporate turnaround had already been created. Nissan’s return to profits after years of losses (Nissan earned a record profit of 230 bn yen in first half of 2001) mark a spectacular win for its savior and turnaround strategist Ghosn. It was a mandate for his style of functioning, considered so far unthinkable in the conservative Japanese society where lay-offs were pariah. To top it all, the major challenge when Ghosn took over the reins of Nissan was to preserve the company’s identity as well as its culture while dealing with delicate issues like job cuts and age-old tradition of keiretsu. That was not an easy job.