Until 1992, the Walt Disney Company had experienced nothing but success in the theme park business. Its first park, Disneyland, opened in Anaheim, California, in 1955. Its theme song, “It’s a Small World After All,” promoted an idealized vision of America spiced with reassuring glimpses of exotic cultures all calculated to promote heartwarming feelings about living together as one happy family. There were dark tunnels and bumpy rides to scare the children a little but none of the terrors of the real world.

The Disney characters that everyone knew from the cartoons and comic books were on hand to shepherd the guests and to direct them to the Mickey Mouse watches and Little Mermaid records. The Anaheim park was an instant success. In the 1970s, the triumph was repeated in Florida, and in 1983, Disney proved the Japanese also have an affinity for Mickey Mouse with the successful opening of Tokyo Disneyland. Having wooed the Japanese, Disney executives in 1986 turned their attention to France and, more specifically, to Paris, the self-proclaimed capital of European high culture and style. “Why did they pick France?” many asked. When word first got out that Disney wanted to build another international theme park, officials from more than 200 locations all over the world descended on Disney with pleas and cash inducements to work the Disney magic in their hometowns. But Paris was chosen because of demographics and subsidies. About 17 million Europeans live less than a two-hour drive from Paris. Another 310 million can fly there in the same time or less. Also, the French government was so eager to attract Disney that it offered the company more than $1 billion in various incentives, all in the expectation that the project would create 30,000 French jobs. From the beginning, cultural gaffes by Disney set the tone for the project. 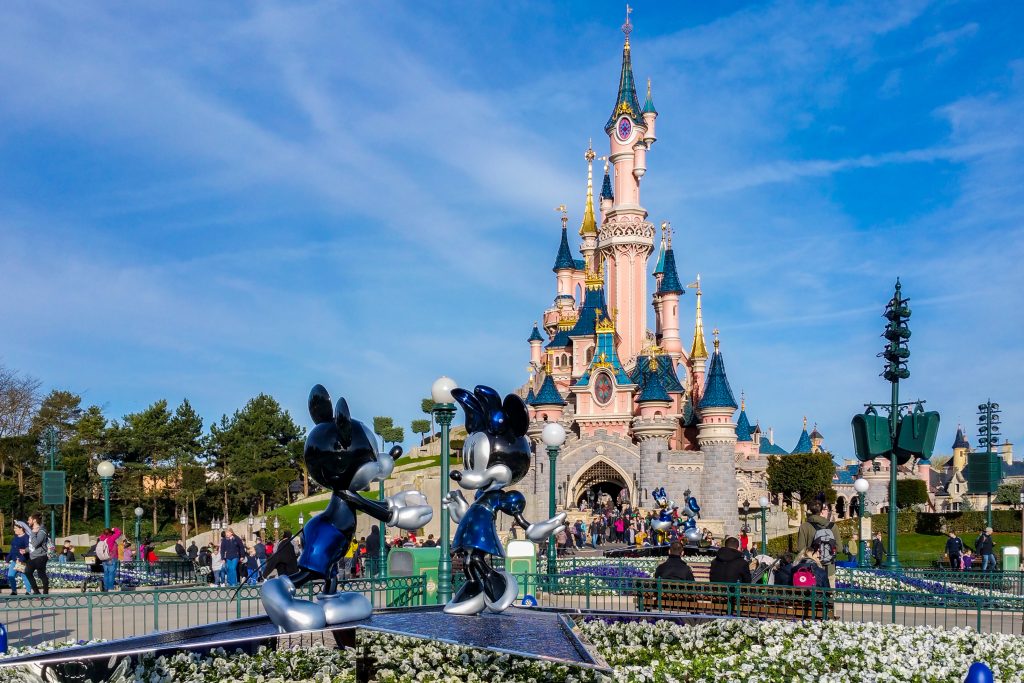 By late 1986, Disney was deep in negotiations with the French government. To the exasperation of the Disney team, headed by Joe Shapiro, the talks were taking far longer than expected. Jean-Rene Bernard, the chief French negotiator, said he was astonished when Mr. Shapiro, his patience depleted, ran to the door of the room and, in a very un-Gallic gesture, began kicking it repeatedly, shouting, “Get me something to break!”

There was also snipping from Parisian intellectuals who attacked the transplantation of Disney’s dream world as an assault on French culture; “a cultural Chernobyl,” one prominent intellectual called it. The minister of culture announced he would boycott the opening, proclaiming it to be an unwelcome symbol of American clichés and a consumer society. Unperturbed, Disney pushed ahead with the planned summer 1992 opening of the $5 billion park. Shortly after Euro-Disneyland opened, French farmers drove their tractors to the entrance and blocked it. This globally televised act of protest was aimed not at Disney but at the US government, which had been demanding that French agricultural subsidies be cut. Still, it focused world attention upon the loveless marriage of Disney and Paris.

Then there were the operational errors. Disney’s policy of serving no alcohol in the park, since reversed caused astonishment in a country where a glass of wine for lunch is a given. Disney thought that Monday would be a light day for visitors and Friday a heavy one and allocated staff accordingly, but the reality was the reverse. Another unpleasant surprise was the hotel breakfast debacle. “We were told that Europeans ‘don’t take breakfast,’ so we downsized the restaurants,” recalled one Disney executive. “And guess what? Everybody showed up for breakfast. We were trying to serve 2,500 breakfasts in a 350-seat restaurant at some of the hotels. The lines were horrendous. Moreover, they didn’t want the typical French breakfast of croissants and coffee, which was our assumption. They wanted bacon and eggs.” Lunch turned out to be another problem. “Everybody wanted lunch at 12:30. The crowds were huge. Our smiling cast members had to calm down surly patrons and engage in some ‘behavior modification’ to teach them that they could eat lunch at 11:00 AM or 2:00 PM.”

There were major staffing problems too. Disney tried to use the same teamwork model with its staff that had worked so well in America and Japan, but it ran into trouble in France. In the first nine weeks of Euro-Disneyland’s operation, roughly 1,000 employees, 10 percent of the total, left. One former employee was a 22-year old medical student from a nearby town who signed up for a weekend job. After two days of “brainwashing,” as he called Disney’s training, he left following a dispute with his supervisor over the timing of his lunch hour. Another former employee noted, “I don’t think that they realize what Europeans are like . . . that we ask questions and don’t think all the same way.”

One of the biggest problems, however, was that Europeans didn’t stay at the park as long as Disney expected. While Disney succeeded in getting close to 9 million visitors a year through the park gates, in line with its plans, most stayed only a day or two. Few stayed the four to five days that Disney had hoped for. It seems that most Europeans regard theme parks as places for day excursions. A theme park is just not seen as a destination for an extended vacation. This was a big shock for Disney. The company had invested billions in building luxury hotels next to the park hotels that the day-trippers didn’t need and that stood half-empty most of the time. To make matters worse, the French didn’t show up in the expected numbers. In 1994, only 40 percent of the park’s visitors were French. One puzzled executive noted that many visitors were Americans living in Europe or, stranger still, Japanese on a European vacation!

As a result, by the end of 1994 Euro-Disneyland had cumulative losses of $2 billion. At this point, Euro-Disney changed its strategy. First, the company changed the name to Disneyland Paris in an attempt to strengthen the park’s identity. Second, food and fashion offerings changed. To quote one manager, “We opened with restaurants providing French-style food service, but we found that customers wanted self-service like in the US parks. Similarly, products in the boutiques were initially toned down for the French market, but since then the range has changed to give it a more definite Disney image.” Third, the prices for day tickets and hotel rooms were cut by one-third. The result was an attendance of 11.7 million in 1996, up from a low of 8.8 million in 1994.

The Case of Euro Disneyland can represent a lack of cultural focus and awareness of the concept which was a globalization of the Disney Corporation. Difficulties that Disney Corporation met are typical for a multinational corporation that has not implemented cross-cultural management and strategies. In fact, Disney Corporation failed to adapt to the French environment and to foresee the influences of foreign and domestic factors. Organization and management relied mostly on American cultures, experiences, and understanding. By not identifying certain cultural differences, Euro Disneyland created an environment that was not acceptable by the European culture itself.

Cultural differences between the US and France have been ignored by Disney. One of the themes of Euro-Disneyland was American. Like other Disneyland in other places, Disney followed one of its two major traditions of not serving wine, despite the attitude among the French that alcohol was a fundamental right. And also restaurants were all American foods. The only exception is Fantasyland which re-created European fables. The recipes in American restaurants were also indistinctly adapted for European tastes. As a consequence, different regional American food was introduced to Americanize Disneyland in Europe.

The intention of Euro Disneyland was to continue Disney’s traditional design in that it shared the many features and attractions of other Disneyland. Widespread market research was conducted and also the cultural adaptation was expressed in such things as designs for parks, standards for employees, and habits for eating. In the research, Disneyland was among the top three tourist spots for Europeans when they want to travel the U.S., Euro Disney emphasized making the Disneyland extremely American to visitors. The hotels, rides, and themes of Disneyland were mostly named in a way of an American flavor, appealing to the European appetite for an American experience.

However, the Euro Disneyland received many complaints from the visitors that Euro Disneyland is too Americanized. Some of the associations and the media in France have expressed cruel criticisms condemning the risk of cultural imperialism by Euro Disney. The appearance of Americanized Disneyland in Europe would encourage damaging the American brand of consumerism. For some others, Euro Disney became the symbol of America and even of anti-American parties.

Disney was tried to hire employees of different nationalities proportional to the expected visitors as 45% of French, 30% of other Europeans, 15% of outside of Europe, but most of the visitors were from France. Disneyland’s employees were trained by managers and supervisors to ensure high quality of services and reliable managerial practices. While European managers were trained at other theme parks, foreign managers were also sent to Euro Disney to work. Although Euro Disney mainly hired Europeans to work in the park, most of the top managerial places were held by the hands of American experts.

Standards of judgment for the jobs in Disneyland were criticized by applicants and the press. The argument revolved around Disney’s grooming requirements. Euro Disney insisted on a strict dress code that was much stricter than other jobs such as a ban on facial hair and colored stockings, standards for neat hair and fingernails, and even a policy of appropriate undergarments. So applicants felt that requirements were unnecessary for a job like a cast member of the theme park.

One of the challenges that Disney faced was convincing the French cast members to break their cultural hatred of smiling and of impoliteness to visitors. While Euro Disney successfully trained cast members, but more than 1,000 employees left their jobs within the first nine weeks of the opening of Euro Disneyland. The main reason why they left was the long working hours at the park. And managers couldn’t understand the European habits and ethics of work, and the working style was not the Europeans were used to in the past.

The business performance of Euro Disneyland was not that great and stable. It couldn’t have the right assumptions on the European market and there has been cruel European recession such as an increase in interest rates and French currency value. The preliminary plan was not ample and accurate in providing resolutions to Disney’s problems and concerns that arise.

A major criticism of Euro Disneyland was that it is neither international nor French in nature, and it failed to satisfy Europeans at all. Many of the visitors could not figure out the theme of Euro Disneyland that whether it is going to be a European park, an American park, or a French park. In the meantime, the cost for Euro Disneyland was also an issue for some visitors. Many of the French visitors had been discouraged from coming because of the cost such as housing cost, souvenirs, admission cost, and so forth. Attendance was kept on decreasing and the company, of course, had a great financial loss.

Euro Disney gave people who couldn’t afford to go to America an identical experience as same as in America. However, the Euro Disney was failed to please French visitors, even European visitors but made them complain about the long lines and poor service.