Ted Turner, founder of Turner Broadcasting System, is an entrepreneur who loves living on the edge. Who else would buy an unprofitable Metro-Goldwyn-Mayer film studio for $ 1.6 billion? Who else would bet on producing the Goodwill Games with U.S. versus Soviet athletes at a cost of about $ 50 million? Who else would report that “the thrill of victory is everything we imagined it would be,” following the triumph of Turner’s Atlanta Braves in the 1995 World Series, following three consecutive, unsuccessful trips to the playoffs?

Robert Edward Turner III was born in 1938, and his boyhood was spent primarily in Savannah, Georgia. As a boy, he was an enthusiastic reader of books about heroes, from Horatio Hornblower to Alexander the Great.

Unsuccessful in playing any of the major sports, he turned to one that required no special physical attributes but relied on the ability to think, take chances, and compete-sailing. Turner became a fanatic sailor, using a method that earned him such nicknames as the Capsize Kid and Turnover Ted. He loved sailing’s competitive frenzy. 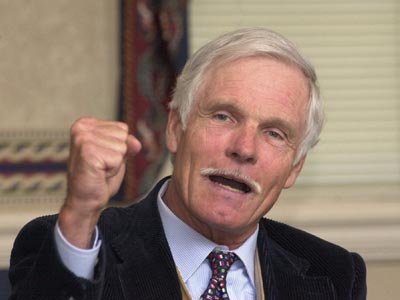 Turner graduated from the second military school he attended and applied to Harvard for admission but was rejected. His father insisted that he attend an Ivy League college, so he went to Brown University to study Greek classics. Dismayed by this area of study, Turner’s father eventually convinced him to change his major to economics. After two suspensions for infractions involving women, Turner was kicked out of Brown University for setting fire to his fraternity’s homecoming float.

After a few years, Turner joined the family business. His father, R E Turner, Jr., was an ambitious businessman who had built a $ 1 — million billboard business. However, in a short time, Turners’ family disintegrated- his sister, Mary Jane, died, his parents were divorced, and his father killed himself.

Although his fathers’ will left the Atlanta billboard company to Ted, a contract to sell the business had been signed before he died. Showing the deal-making ingenuity that has characterized his business activities, the young Turner convinced the buyers that, by shifting lease sites to another company he had inherited, he would be able to sabotage the company before the deal closed. The buyers backed down, and Turner’s career moved forward. At the helm of the company, Turner began to expand, buying up billboard companies and radio stations. Since these constant acquisitions required huge outlays of cash and incurred debt, he learned to maintain a sufficient cash flow to cover payments.

In 1969, he took his company public with a merger that included a small Atlanta television station now called WTBS. In 1976, WTBS was the first station to become a network by its signal to cable systems via satellite. By 1986, WTBS reached 36 million U.S. households and was cable television’s most profitable advertising supported network. The 1986 operating cash flow of the company was $ 70 million, and 1989 sales topped the $ 1-billion mark.

Turner did not sit back and watch the cash come in. He was, and is, always looking for ways to build his assets. Despite industry skepticism, Turner used the growing cash flow from WTBS to start the Cable News Network (CNN) in 1989. In spite of criticism from industry “experts,” the 24-hour news channel was a success, catapulting into international success with the extensive coverage of the Gulf War in 1990. The success of CNN enabled Turner to create additional news networks domestically and internationally including Headline News, CNN Financial News Network, and CNN International, as well as establishing three interactive sites on the World Wide Web. By the end of 1995, the news division of Turner Broadcasting Systems posted revenues of $ 765 million and an operating cash flow of $ 281 million. Phenomenal public viewing of the coverage of O.J. Simpson trial accounted for an increase of 45 percent in combined household viewing of CNN and headline news on a 24-hour basis. Turner’s success, however, also served to attract additional competition, with 3 of the 4 major networks launching news networks in 1996.

Turner’s uncanny success in starting high-risk ventures is not accidental. A vigilant and relentless manager, Turner would often sleep on his office couch after working an 18-hour day. Even now, his commute to work is a matter of going “down” to the office; he now lives in the penthouse apartment   of one of the Turner towers in Atlanta. Until autumn 1986, when Turner established a five-man management committee comprised of veteran TBS executives, he personally supervised company tasks and decisions. One person familiar with Turner’s management style was surprised at the formation of the committee: “He (Turner) would never even let the five go out and have a beer together, let alone run the company.”

Turner’s talents extend beyond the corporate board room. A high risk taker, he won the America’s cup race in 1977. In 1979, he won the fastnet race off England’s southwest coast, during which 156 competitors died in the violent seas.

In his own view, Turner is a quintessential achiever. He says, “I’ve got more awards than anybody-anybody my age. I’ve probably got more debt than anyone in the world. That’s something isn’t it?” What makes him keep pushing for more?

Not satisfied with his accomplishments, Turner has established a visionary goal: to use his power and network to influence world issues. He wants to concentrate on issues such as nuclear weapons, environmental abuse, and over population. He speaks proudly of TBS specials, such as the one based on Martin Luther King, Jr. When asked if he would want to be a president of the United States, Turner said, “The United States is only five percent of world population. I’m in global politics already.”

Turner’s view is both global and long term, being obsessed with both owning a U.S. television network and being the dominant figure in the international cable T V market. But at the end of 1989, gross profits were $ 631 million and sales were over $ 1 billion. Turner felt that the simple solution was either to increase buyer clout by taking over an existing network or to acquire his own program library.

Turner’s attempt to take over CBS in 1985 failed, costing him $ 23 million in lawyer and investor banker fees. But, Turner an undaunted optimist and aggressive competitor, viewed this attempted hostile take over defeat as a triumph, since CBS had to borrow heavily to acquire stock to stop the take over. At the time, Turner felt that this set CBS back10 years, while leaving him in a position to pursue his aggressive growth strategy.

Turner moved directly from his setback with CBS to the acquisition of MGM. In 1985, one CNN executive said, “Ted’s mind is always 5 or 10 rears down the road. Right now he’s probably living in 1995.” Turner’s purchase of the MGM studio was motivated by rising licensing fees for old movies and television shows. Bill Bevins, TBS financial chief executive, projected that the higher fees would lower operating profits from 40 percent of sales in 1985 to 10 percent in 1990. The 3,650-film library offered Turner Broadcasting a solution to rising licensing fees. About 1,000 of these films have enduring commercial value, have been and continue to be aired on WTBS. Some analysts felt that the price paid-$1.6 billion-was too high, with the deal putting Turner heavily into debt. More debt for TBS resulted from Turner’s decision to colorize about 10 percent of the films in this newly acquired library-at an average cost of $ 300,000 per film and a total cost of $ 22 million to $ 55 million.

Constant attention to his goals of expansion finally bore fruit with the merger of TBS and CBS. In a series of extremely complex and time consuming negotiations, requiring the approval of the Justice Department and the Federal Trade Commission, this merger created the worlds’ largest entertainment conglomerate, valued at between $ 6.2 billion and $ 8.5 billion. Under the terms of the agreement, each (TBS&CBS) is a wholly owned subsidiary of a new Time Warner Holding Company, of which Ted Turner is the Vice Chairman while remaining CEO of TBS. According to estimates, the effective sales for 1994 were $ 18.7 billion with cash flows of $ 3.4 billion. In less than three decades, Turner leveraged a $ 1-million-dollar billboard company into a multibillion dollar entertainment conglomerate. He saw cable television ending the near-monopoly status of the Big three television networks, saw the value in providing real-time international news coverage, saw the emerging entertainment market in international markets, and is betting on the integration of the internet with news coverage.

In spite of the frequent criticism of his obsessions by one of his major stockholders, and the high risk associated with doing things that were new and different, Turner maintained his focus. People who know Turner well will not bet against him. He has an entrepreneurial spirit that thrives on living on the edge, and relishes challenging situations.