When a number of individuals begin to work at interdependent jobs, they often pass through several stages as they learn to work together as a team.  The stages of team development life cycle  are forming, storming, norming, performing, and adjourning.  This model of team development was first proposed by Bruce Tuckman in 1965, who maintained that these phases are all necessary and inevitable and allow team growth. 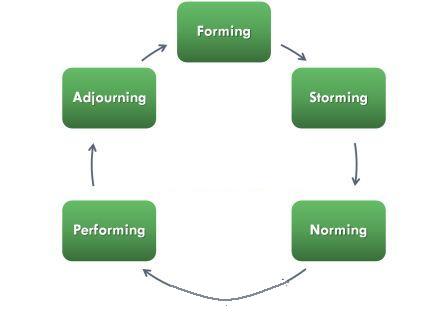 Though these are not followed rigidly, they do represent a broad pattern that may be observed and predicted in many settings across team’s time together. These stages are the result of a variety of questions and issues that team members face such as “who will be members of the team?” “Who will perform what functions?” “Who will contribute what?” “What rules will be followed?” “How can conflicts among members be resolved?” and so on.

These typical stages of team development life cycle  are described below:

It is not necessary that all teams follow the rigid pattern of team development life cycle  prescribed here and the similar problems they face at each stage because each team is different in some respect based on the type of members and problems and functions assigned. However, concept of team development life cycle  is significant in the context of the nature of problem which team members are likely to face in team-work.