One of the grimmest predictions about the future was described by Robert Putnam in his work on social capital. He envisaged low likelihood of participation in community life, smaller groups of friends, even less happiness, and lower perceived quality of life. Furthermore, the enthusiasts of globalization and internet predicted that since people do not have to be together in order to work together, so simply they will not be. Both of these statements are deemed fallacious when recent innovative developments like coworking spaces are considered. Instead of dividing people and further rupturing community life, they reintroduce collaboration and community building through establishing an innovative office design that is being implemented worldwide.

Coworking has been present for centuries, but the first forms of collaboration appeared in the beginning of the 20th century. Artists from around the world gathered in Paris to live and work. One of the establishments, La Ruche, was created by Alfred Boucher to accommodate live/work space for artists. The place became a community and was centered on work of its residents. Another form of collaboration is the “associated offices” that appeared in United States of America during the crisis of 1929. These offices gathered workers from the same or various professions working in one office as a cost-cutting strategy. The global recession of 2008 act as a catalyst of bourgeoning coworking spaces around the world.

The term “coworking” was first used by Bernie DeKoven in 1999 to describe virtual connectivity i.e. online tools of collaboration. In a context of a physical space, it was used by Brad Neuberg in 2005 even though coworking spaces, in fact, already existed before that time. The vigorous spread of coworking did not start until the already mentioned crisis of 2008. Nowadays, it is extremely hard to assess the size of the movement with different incarnations of coworking emerging. For example, Centre for Social Innovation in Toronto was launched in 2004 and merges both coworking philosophy and multi-tenant nonprofit centre principles.

Coworking movement has many principles that are shared between its members. The main value is that coworking spaces are about social connectedness, gathering, sharing, and collaborating. There are, however, a number of conditions that must be satisfied, in order for a viable coworking space to operate. Jones, Sundsted, and Bacigalupo (2009) describe it as a coworking recipe::

“Start with community. Blend like-minded people of different backgrounds together thoroughly. Add openness. Share ideas, thoughts, knowledge and problems in equal parts. Sprinkle collaboration on top. Ingredients will meld together to create new flavor. Add healthy amounts of sustainability. This will help maintain the recipe’s structure and prevent it from falling apart. Wrap in accessibility. Make sure all ingredients are given proper opportunity to interact. Enjoy!” 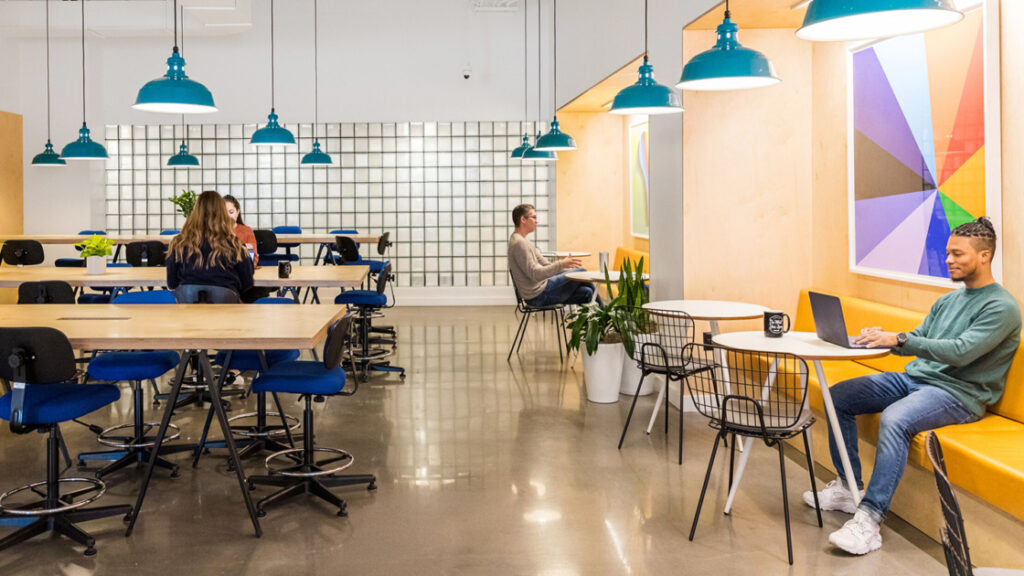 The movement build on such principles also is directed against isolation that streams from the type of work the coworkers are performing. Usually, it is some form of knowledge creation, data transformation, or a creative industry-related work. Sometimes, the members of the movement express unacceptability of corporate culture and its work structure (typical 9-5 jobs in artificially separated cubicles). Coworking as a movement has either outspoken or implied social change as a value. First of all, it is changing work/live relationship, and leads to sustainability in many ways. Second, the coworking members work often on projects related to social innovation and change. The honorable mention of social change-related coworking spaces is network of the Hubs.

One of the innovative factors of coworking is the sociality of the work and the value of relations face to face. This aspect is crucial in coworking movement, because its enthusiasts aim at creating a thriving community rather than simply a workplace.

As previously mentioned, coworking incorporates individuals with mostly knowledge creation type of work and designers or artists. In most cases, they are not employed by the same organization, but sometimes small businesses are a part of a coworking space. Additionally, there is a high degree of independent work involved, but there is also a collaboration factor. People from different professions and types of work engage in dialogue, exchange ideas, and add an interesting perspective to problems defined by others, in order to create innovative ideas and become more productive. Coworking space becomes a place where unlimited intellectual resources are stored, and it multiplies one’s network of professional and informal connections which is beneficial to individual work life and mental health.

Various individuals have different patterns of use of coworking spaces. Freelancers sometimes need only a desk with internet connection and a telephone. Artists might need bigger space and flexibility. Some might use coworking spaces on a full-time or part-time basis, and some only for once in a while drop-in sessions. These offices also target people (so called nomad workers) who travel and frequently change their place of living so they cannot maintain an office. This initiative has also a myriad of occupations, and they include professionals from diverse sectors. Additionally, they come from different organizational structures: start-ups that cannot afford and office yet, small businesses that choose not to have own office, non-profits, freelancers, sometimes individuals that work for large companies as consultants, etc.

The organization of the shared working environment is very important for a proper operation of a coworking office. In general, it should be flexible and have an open design, so it can accommodate many different events and activities through moving furniture, and separators that play a role of walls. Additionally, coworkers should have access to it at any time of day or night which sometimes is not possible due to security concerns. Coworking spaces usually have following amenities: internet, photocopy and printing, fax machines, mailbox, kitchen facilities, meeting rooms, coffee/tea machines, storage, and sometimes audio-visual equipment. Spaces at different stages of development might not have all of mentioned amenities or have more advance office equipment.

Coworking spaces can accommodate members by offering them private storage place, or sometimes offer them separate office depending on the characteristics of the space. Different patterns of use mean different level of financial contribution for the maintenance of the office. Coworking spaces have a tiered system depending on the amount of time spent at the office, and sometimes the area needed for operations. Usually, coworking spaces do not make a profit, and at times they can run only with the help of grants and subsidies.