The expansion of suburbia brought with it planned residential  developments. These new sub divisions were connected by many new city streets  and through fares along which retail businesses could be established. The notion  of the planned shopping center was born. Developers could plan multi store  facilities that would serve the needs of these new  neighbor  hoods with grocery,  drug, and apparel goods. With the availability of large tracts of relatively cheap  undeveloped land located many miles from the inner city, but close to these new  living areas, large  centers  could be designed that would offer one stop shopping  to entire clusters of residential areas. The last thirty years witnessed the  widespread development of multiunit retail strip  centers  and the construction of  multiacre shopping malls/theme parks.

Several important issues surround the choice of locating a retail business  in a planned shopping center. One important consideration is the nature of the  business sharing leases space within the center. Recent research has shown that  the image of your retail business will be either positively or negatively influenced  by the types of business that surround you, a process that is called image  transference. 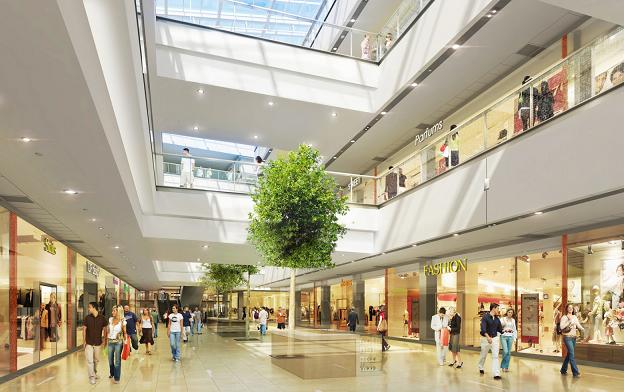 The term shopping center has been evolving since the early 1950s. Given  the maturity of the industry, numerous types of centers currently exist that go  beyond the standard definitions. Industry nomenclature originally offered four  basic terms : 1)  neighborhood   2) community, 3) regional, and 4) super  regional. However, as the industry has grow and changed, more types of  centers  have evolved, and these four classifications are no longer adequate.  The International Council of Shopping Centers (ICSC) has defined eight  principal types of planned shopping centers.

This type is designed to provide convenience shopping for the day-to-day  needs of consumers in the immediate  neighborhood. Roughly half of these  centers are anchored by a super market, while about a third have a drugstore  anchor. These anchors are supported by smaller stores offering drugs, sundries,  snacks, and personal services. A  neighborhood  center is usually configured as a  straight-line strip with no enclosed walkway or mall area, although a canopy  may connect the store fronts.

The relatively small size of the strip center means that it offers a rather  narrow array of convenience or specialty stores. It is best designed to serve  individuals living in the immediate vicinity or frequent passers by who would see  the stores in the center as being “convenient”. The  neighborhood  strip center can  be placed almost anywhere that land permits. Inter sections and main  thoroughfares are the most popular sites.

Notably, recent changes in shopping patterns have seen a move away  from urban and regional malls to these  neighborhood  formats.  The gross leasable area (GLA) of these types of centers ranges from  30,000 to 150,000 square feet on a site of 3 to 15 acres, with the typical size  being about 50,000 square feet. If the target market for a retail store matches the  profile of the  neighborhood  center, and it can survive with  the  number of  residents within the trade area served by the center, the this may be a suitable  location for the business.

A community center typically offers a wider range of apparel and other  soft goods than the  neighborhood  center. Among the more common anchors are  super markets, super drugstores, and discount department stores. Community  center tenants sometimes include off-price retailers selling such items as apparel,  home improvement/furnishings, toys, electronics, or sporting goods. The  center  is  usually configured as a strip, in a straight line, “L” or  “U” shape. Of the  eight centers types, community centers encompass the widest range of formats.  For example, certain centers that are anchored by a large discount department  store refer to themselves as discount centers. Others with a high parentage of  square footage allocated to off-prices. Retailers can be termed off-price centers.  The community centers usually has 100,000 to 350,000 or more square  feet of gross leasable area. Some 90 percent of the newer centers measure less  than 150,000 square feet of GLA.

This type provides general merchandise, a large percentage of which is  apparel, and services in full depth and variety. Its main attraction are its anchors:  traditional, mass merchants, or discount department store or fashion specialty  stores. A typical regional center is usually enclosed, with an inward orientation of  stores connected by a common walkway. Parking surrounds the outside  perimeter.

A keep point of differentiation between the community and the regional  center is the extent to which people are willing to drive from one city to another  to patronize a regional center. In other wards, the shopping alternatives that are  available in a regional center must not be present in surrounding communities.  This case is often encountered in large urbanized areas that contain multiple  large-scale malls, each of which contains similar anchors. A retailer’s decision to  locate with in a regional mall is, again, dependent on the level of demand that is  available given rental and utility costs. Another important mall location  consideration is signage. As a non-anchor tenant, the lifeblood is not traffic  drawn from the street by a sign or storefront but the inter anchor traffic generated  with in the mail. This captured traffic, however, permits the survival of narrow  niche marketers like specialty restaurants.

This is similar to a regional center but because of its larger size, a super  regional center has more anchors, contains a deeper selection of merchandise,  and draws from a larger population base. As with regional center, the typical  configuration is an enclosed mall, frequently with multiple levels.  The super regional shopping center is the largest of the planned centers. It  encompasses the largest, most complete assortments of goods and services  backed by four or more department store in the 100,000 square foot and larger  class. The gross leasable area of the super regional center ranges from 800,000  square feet to well over 1,000,000.

This type is composed mainly of upscale apparel shops, boutiques, and  craft shops carrying selected fashion or unique merchandise of high quality and  price. These centers need not be anchored, although sometimes restaurants or  entertainment can provide the draw of anchors. The physical design of the center  is very sophisticated, emphasizing a rich  decor  and high quality landscaping.  These centers usually are found in trade areas having high income levels.

Dominated by several large anchors, a power center includes discount  department stores, off-price stores, warehouse clubs, or “category killers,” that  is, stores that offer tremendous selection in a particular merchandise category at  low prices. Some of these anchors can be freestanding (un-connected). The canter
has only a minimum amount of small specialty tenants.

Power centers are usually constructed as large strip centers with  at-least  75  percent of the gross leasable area devoted to three or more high-traffic high-volume discount-oriented anchor-type tenants. Not all power centers are newly constructed. In fact , many viable “Power Centers” are traditional community shopping malls or older open centers that have  been revived as discount shopping centers. In between the anchor stores are  smaller leasable areas for independent or chain discount retailers. A major  consideration will be price and assortments. The smaller tenant in the power  center will need to be a niche discounter. While traffic counts will be very high  for the power centers, the anchor stores will generally cover a broad spectrum of  product lines. To successfully compete in the backyard of these discounts giants,  a retailer will need to have carefully selected merchandise and services offered to  be consistent with the needs of the power center shopper, but fall out side the  competitive mix of the anchors.

This center typically employees a unifying theme that is carried out buy  the individual shops in their architectural design and, to an extend, in their  merchandise. The biggest appeal of this center is for tourists; it can be anchored  by restaurants and entertainment facilities. The center is generally located in an  urban area, tends to be adapted from an older(some times historic ) building, and  can be part of a mixed-use project. A theme/festival center normally contains  from 80,000 to 250,000 square feet and covers 5 to 20 acres. Theme centers have  common architectural motifs that unite a wide range of retailers. These tenants  tend to offer unusual merchandise and have restaurants and entertainment centers  that serve as anchors, rather than super markets or department stores.

Usually located in a rural or occasionally in a tourist area, an outlet  center consists mostly of manufactures stores selling their own brands at a  discount. An outlet center typically is not anchored. A strip configuration is most  common, although some are enclosed malls and others can be arranged in a  “Village” cluster. Factory outlet malls draw a combination of middle and lower  class socio-economic customers. Some contemporary factory outlet centers also  include some off price stores, particularly newer multilevel mall — style formats.  In addition, given the larger scale for mats of outlets centers, factory outlets seem  ideally suited for tourist destinations.