Throughout its history General Electric Co. enjoyed the benefits of a consistent marketing message. From the 1930s to the 1950s the company relied on the slogan ‘‘Live better electrically,’’ which was followed by two decades of variations on the word ‘‘progress,’’ such as ‘‘Progress is our most important product.’’ In 1979 GE unveiled ‘‘We bring good things to life,’’ a cornerstone to one of the most successful corporate branding campaigns in history, backed by about $1 billion in advertising. The company also had consistent leadership in the form of John F. ‘‘Jack’’ Welch, who became chairman and CEO in 1981. The charismatic leader sought to build up GE’s status in all of the technology, service, and manufacturing areas that the company participated in. By the time Welch announced that he would retiring in 2001, GE, fast growing and profitable, had a market capitalization of $505 billion, making it second only to Microsoft. Welch’s tenure at the top, however, ended on a sour note when GE failed in its bid to acquire a major rival, Honeywell International.

Welch was succeeded by Immelt, who set out to put his own imprint on GE by, among other things, revamping the company’s marketing. According to Diane Scarponi, writing in the Seattle Times, ‘‘Immelt said shortly after he was appointed in September 2001 that he wanted to rethink the company’s image.’’ Beth Comstock, head of communications at GE, told Scarponi, ‘‘Immelt has really been pushing a technology focus, a reinvigoration of technology at GE around the world. We wanted our communications to match that.’’ The company conducted research that suggested that most consumers connected the ‘‘We bring goods things to life’’ slogan with GE’s lighting and appliance business. Since the introduction of the slogan a generation earlier, however, the company had grown in so many directions that lighting and appliances had come to account for only 6 to 7 percent of revenues. Management decided that GE needed a new articulation, one that was part mission, part vision, and part strategy. After 18 months of research, brainstorming, and testing, the company and BBDO Worldwide coined a new slogan, ‘‘Imagination at work,’’ and began to plan a marketing campaign to support it.

One goal of the ‘‘Imagination at Work’’ campaign was to reach a broader range of consumers. Instead of concentrating on Sunday-morning television programming, the new GE spots would try to appeal to prime-time audiences by advertising on such shows as the hit sitcom Friends. In defining its target market the company took care to include Hispanic consumers, who accounted for nearly 13 percent of the U.S. population, a figure that was expected to reach 17 percent by 2020. Because the contemporary GE was essentially a business-to-business company, the campaign also sought to communicate with other companies, who were GE’s business partners. In addition it needed to reach GE’s investors. The launch of the new campaign came at a time when the company had seen significant erosion in its stock price. A public company, GE wanted to assure investors that, because of its continuing ability to develop innovative products, it was a corporation with a large amount of untapped potential. GE employees were also a target audience; the campaign provided a directive to them to create the new products that would meet the needs of consumers and create the growth that investors expected. Moreover, because GE was a global company, the new campaign had to reach a worldwide audience of consumers, businesses, and investors.

As a multifaceted global company involved in 11 different businesses, GE faced competition on a multitude of fronts. Direct global competition came from a variety of companies, since GE was involved in such diverse areas as aircraft engines, television, amusement parks, commercial lending, environmental control products, plastics, medical technology, and robotics. As a result GE competed against a panoply of multinational corporate giants, including Citigroup, General Motors Corporation, Honeywell International, J.P. Morgan Chase & Co., the News Corporation Limited, Rolls-Royce, Time Warner Inc., Toshiba Corporation, the Walt Disney Company, and Whirlpool Corporation. Hence the ‘‘Imagination at Work’’ campaign had to promote GE in a broad enough way to position the brand in a myriad of markets, taking on countless competitors. Because a bulk of its advertising was on television, GE, and its message, also had to contend with indirect competition in the form of a host of other voices vying for viewers’ attention. Further, given that the campaign was based on the idea that GE was imaginative and innovative, the pressure was on the marketers to demonstrate that quality in the advertising itself.

Judy Hu, GE’s general manager of advertising and brand, explained the company’s rebranding strategy to Kate Maddox and Beth Snyder Bulik of B to B: ‘‘We wanted to highlight some of our ‘wow’ products and services–things that were unexpected and that people didn’t know GE was involved in . . . The overall objective was aligning our market position with our future and creating a truly integrated campaign.’’ Furthermore she said, ‘‘It had to be global, touch our external and internal constituencies and use as many different types of media as possible.’’ Because they had the best stories to tell in terms of innovation, three divisions–GE Aircraft Engines, GE Plastics, and GE Medical Systems–became the focal point of the initial advertising efforts. The $100 million ‘‘Imagination at Work’’ campaign broke on January 19, 2003, with television, print, and Internet advertising. A week earlier GE had introduced the program to its employees by giving out promotional items such as mouse pads because, as Hu told B to B, ‘‘We wanted everyone to understand why we were doing it and what it meant.’’ GE also held an online trivia question about the company. The winner was given a trip to the Golden Globe Awards, during the telecast of which the new commercials would first air–a further reflection of GE’s desire to appeal to a prime-time audience. The first set of TV spots tried to establish the new slogan and reposition the brand while at the same time drawing attention to a specific GE business. In one commercial the company promoted its aviation products by wondering what would have happened 100 years ago if the Wright brothers had strapped a GE jet engine to their box-kite airplane, which, at the close of the commercial, morphed into a contemporary jet. Another spot compared GE’s medical technology with a genius clerk able to locate medical records quickly in an immense storage room.

The ‘‘Imagination at Work’’ campaign also included print and Internet elements and even an upgrade of the GE logo, traditionally rendered in black and white but now available in 14 different bright colors and pastels. According to Maddox and Bulik of B to B, the print ads used ‘‘the ‘wow’ factor to highlight GE’s various businesses. The ads featured dramatic photos of products such as a wind turbine, Evolution locomotive and GE image-guided surgery, while providing additional information on the nuts and bolts of the products.” The ads ran in such mainstream publications as the New York Times, the Wall Street Journal, BusinessWeek, and Forbes as well as in trade magazines, including Automotive Design and Production, Building Operation Management, Plastics Technology, and Power Engineering. To promote GE online and to help reeducate consumers, the company launched the ‘‘Pen’’ subcampaign, developed by Omnicom’s OMD unit. ‘‘Pen’’ introduced an interactive Web space in which users could put their own imaginations to work by making drawings that could be E-mailed to others, who could then add their own touches.

GE built on the successful launch of the  ‘‘Imagination at Work’’ campaign by adding new TV spots and expanding other elements. In one commercial promoting GE Commercial Finance, Christopher Columbus charmed the queen of Spain into providing him with three small ships. According to the voice-over, ‘‘Without proper financing, even the best ideas in the world can fall flat.’’ Perhaps the most memorable of the subsequent television spots was ‘‘Lassie,’’ a black and white commercial that played off of the old television series featuring Lassie, a collie, and her owner, Timmy, to promote GE’s security technology. In it Lassie protected Timmy from the threat of a ferocious cougar by rising up on her hind legs and, with the help of computer-generated imagery, unleashing a set of martial-arts moves. The graphics and voice-overs of three of the later television commercials were translated into Spanish and then ran for 10 weeks on Spanish television channels in seven markets, including Dallas, Houston, and Miami. The ‘‘Pen’’ sub-campaign also warranted a second generation; an enhanced website was launched in September 2004. Called ‘‘Imagination Cubed,’’ it allowed up to three people to collaborate on illustrations at the same time while communicating through a chat interface. The ‘‘Imagination at Work’’ campaign expanded beyond the United States as GE began advertising in Asia and Europe, where the campaign included outdoor advertising. In May 2005 GE introduced an initiative called ‘‘Ecomagination’’ to promote its environmentally friendly products. This initiative, the largest marketing effort in the ‘‘Imagination at Work’’ campaign, broke with eight-page inserts in four major newspapers and later included TV spots, more print ads, and another online element. 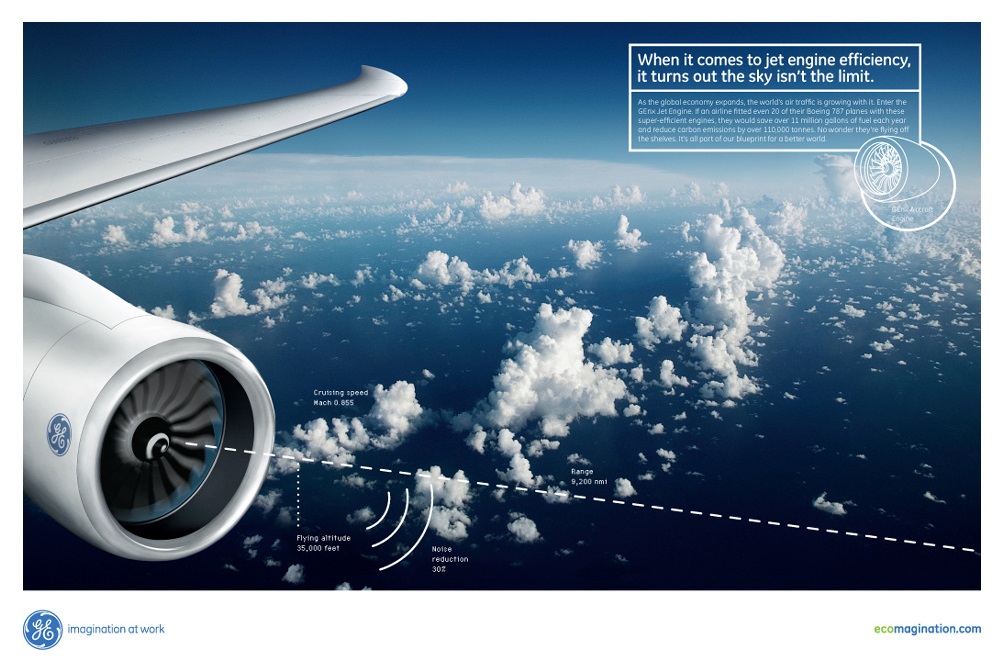 Dropping the slogan ‘‘We bring good things to life’’ in favor of ‘‘Imagination at work’’ was met with criticism from both inside and outside GE. Some suggested that, rather than making such a radical departure, the company would have been better served to build on the previous slogan, which had been so successful. It was also suggested that, as a slogan, ‘‘Imagination at work’’ was far from imaginative: Black & Decker used ‘‘Ideas at work,’’ Sony had ‘‘Innovation at work,’’ and three companies, including Ford, were mining the phrase ‘‘Ingenuity at work.’’ But Robert Lauterborn, a former GE marketing executive turned college professor, approved of the change, telling Sean Callahan of B to B, ‘‘It’s a return to GE’s roots as one of the great innovative and manufacturing companies on earth.’’

Regardless of what others thought, GE’s management appeared pleased with the change. About a year after the campaign began, market research indicated that half the respondents perceived GE as ‘‘dynamic,’’ 40 percent saw it as a company able to deliver high-tech solutions, and 35 percent considered it ‘‘innovative.’’ Comstock told Marv Balousek, writing for the Wisconsin State Journal, that ‘‘Imagination at Work’’ was more than just a tagline, explaining, ‘‘It’s really become a rallying cry. It’s allowed us a platform to reinvigorate marketing.’’