“The innovator’s dilemma [is] that ‘good’ companies often begin their descent into failure by aggressively investing in the products and services that their most profitable customers want.” –  Clayton Christensen, The Innovator’s Dilemma.

The innovator’s dilemma is the dilemma of recognizing when to respond to technological change in a way that is fundamentally different from that which usually works for large, successful businesses. The dilemma is that of recognizing which of two types of technological innovations are looming on the horizon for a particular industry. The two types of technological innovations are sustaining technologies and disruptive technologies. For each of these, the “threats” posed to an industry, and the potentially successful responses to them, differ in fundamental ways.

In Christensen’s model, the development trajectory represents the pace of innovation for a particular technology.   While disruptive technologies usually have initially worse product performance, the rate of improvement for the new technology is greater. This means that the new technology will eventually surpass the performance of the older sustaining technology and eat into the high-end market share.   Due to the relative immobility of the larger firms’ organization structures, they are often unable to respond to the rapidly changing market conditions by the time they recognize the disruptive technology as a viable alternative within their market space.  The large firms then find themselves behind the current technology and unable to respond quickly enough as the more mobile small firms erode their market share.   The way in which the initial success of these customer-oriented firms impedes their ability to investigate lower-end, emergent technologies. 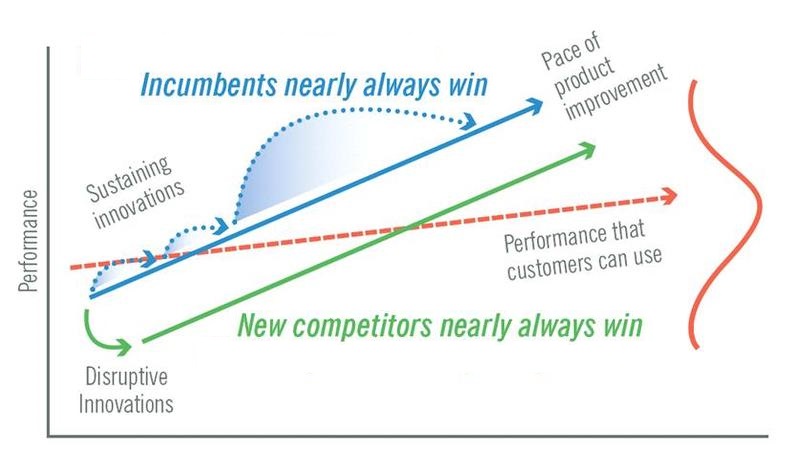 The innovator’s dilemma discusses a situation in which there are established incumbents in a specific market who are investing in sustainable innovations.  They are then faced with a new entrant to the market that introduces a disruptive innovation. The new entrant attacks only a small part of the incumbents business, usually the one in which the margins are very low. At this point, the incumbent decides not to compete in this business anymore because they don’t want to invest in defending their least profitable business and/or are afraid of cannibalizing their main business. As a result, the new entrant is then able to capture a significant market share in that specific segment.  After it captures the low end of the market, the entrant moves upstream to the next part of the business. Again, the incumbent is reluctant to compete in that segment which is now its newest least profitable segment. The entrant then captures a significant market share in this second segment.

“the pace of technological progress in products frequently exceeds the rate of performance improvement that mainstream customers demand or can absorb. As a consequence, products whose features and functionality closely match market needs today often follow a trajectory of improvement by which they overshoot mainstream market needs tomorrow. And products that seriously underperform today, relative to customer expectations in mainstream markets, may become directly performance-competitive tomorrow.” –  Clayton Christensen, The Innovator’s Dilemma.

Many successful companies fail not because they neglect customers but because they take them too seriously and continue to pamper them by adding more features. An excessive focus on satisfying existing customers prevents the current market leaders from creating new markets and from finding new customers for the products of the future. In the process of adding new features to please their existing customers, the product or service becomes overpriced, going beyond the reach of customers, who might be looking for a simpler, cheaper product.  Thus, the innovator’s dilemma is the challenge of seeing these threats coming, and knowing to respond to them with an entirely different kind of innovation.

According to Christensen, many successful companies face the innovator’s dilemma. Keeping close to existing customers may make sense in the short run. But long-term growth and profitability need a totally different approach. When the successful players are not prepared to embrace a new business model, they lose market share to more nimble or entrepreneurial companies, which are not encumbered by any baggage.

The next logical question in light of the rather grim picture presented by the Innovator’s Dilemma is can a firm hope to succeed?   The answer lies in firms being able to identify, develop and successfully market emerging, potentially disruptive technologies before they overtake the traditional sustaining technology. The best way for established organizations to develop products  and services using disruptive technologies is to create autonomous organizations or  to create an organizational culture that  embraces the disruptive change.