In 2007 Amazon introduced the first Kindle e-reader for $359, their first foray into selling a tangible product under their own brand. The media quickly named the product an e-reader, a limited use mobile device designed for downloading and storing content from online.  Perpetuating a successful, yet deceptively simple business model, the Kindle e-reader made “online [book] shopping so easy and convenient,” customers could browse, download and read books, magazines and newspaper content, at the click of a button on the Kindle. The e-reader market perked up as Amazon offered an affordable price point of $9.99 for book downloads and blended it with an easy to read e-ink, glare free device along with a simple user interface and operating system. Kindle’s launch success became the catalyst that opened up the e-reader market for big box book retailers, Barnes and Noble and Borders bookstores who shortly followed with introductions of their own e-readers and content libraries. Barnes & Noble jumped into the market in 2010 with their product, the Nook. These e-readers had the ability to upload books, magazines and even some newspapers almost instantaneously, but they were not in fullcolor nor did they have email, video and word processing capabilities like tablets, such as the iPad, HP Touchpad and Samsung Galaxy. As more tablets came to market, some mused about whether Amazon, the successful e-tailer, could credibly compete in the tablet war. Jeff Bezos, Amazon’s founder and CEO seemed to think so. By early Fall 2011 Apple thought they had the tablet market all wrapped up for the upcoming holiday season with their popular iPad tablet posting record sales. That was until Jeff Bezos, CEO of Amazon, the Internet retailer, surprised the mobile computing industry with his late September introduction of the Kindle Fire, a fully loaded “e-reader’s tablet” for a mere $199 compared to iPad’s $499. The leading e-tailer had unexpectedly introduced a new mobile device that promised to be the first credible threat to the leading iPad. That was, if Amazon could smartly position itself in the fast-changing tablet arena where iPad dominated. 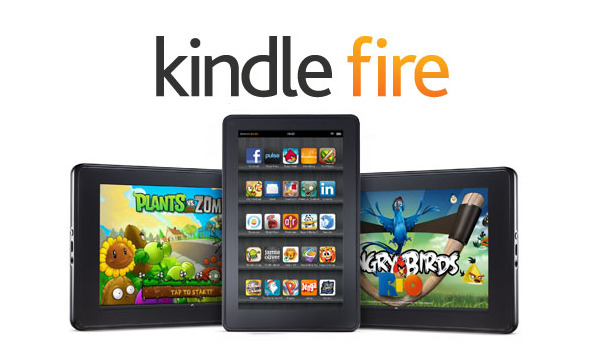 Kindle Fire is a 7-inch multi-touch display with IPS technology, runs on Google’s Android operating system and have access to the Amazon Appstore and digital content like streaming movies, TV shows, and e-books. Compared to the market leader Apple iPad, Kindle Fire is a sort of low end device as it lacks camera, GPS, storage capability, high end graphical display, powerful chip, etc. Amazon’s marketing strategy is that it tries to define its own market by targeting the non-iPad users, users who cannot afford iPad, users looking for other Android based tablets and making the competition irrelevant by making the device as a media consumption device empowered by Amazon’s media platform that has huge content like music, movies, videos, books, etc. Kindle Fire differentiates itself from iPad and other tablet devices by focusing not on high end features but with simple and focused features that offers its users a unique experience and affordability. Also Kindle Fire is light weight, durable, good battery life and easy to use.

Amazon.com offers Kindle Fire at a lower price as it eliminated many costly feature like the camera, 3G, GPS, Bluetooth, etc but it offered its customers other features like its own developed web browser Silk that serves the web pages quickly using the network speed and computing power of the Amazon Elastic Compute Cloud (Amazon EC2) and the datacenters that host Amazon EC2 are run by Amazon. Low storage is compensated as the users can store their data on the Amazon EC2 Cloud, and Amazon has huge content like books, music, movies, videos, TV Shows, etc that users can easily download and play it on the device. Kindle Fire is being sold by Amazon at close to its cost and at a slight loss but it is hoping to make money through selling the content that includes 19 million songs, books, movies, applications, etc. Since Kindle fire is closely tied to the Amazon Ecosystem like Amazon.com store, cloud, content and it will be hugely beneficial to the marketers and content providers to sell their offerings easily, target customers with specific offerings, to interact and understand the consumer behavior through this. Kindle Fire also helps in increasing its core business which is e-retailing as the device provides an easy access to the store where customers can buy and sell anything and everything.

Amazon also launched a free library of downloadable book titles and video movie streams through the site and local libraries for Amazon Prime subscribers. “Prime” members initially paid an annual subscription fee of $89 to receive free shipping on all purchases through Amazon’s site and would now benefit with additional access to free downloadable content. This was Bezos way of rewarding customer loyalty and keep customers returning for any purchase.

According to IDC, Amazon sold about 4.7 million units of Kindle Fire during the fourth quarter of 2011 and the device was shipped to customers from November 15, 2011.   The device has boosted Amazon revenues in the first quarter of 2012 and also helped the company to double its market share of the Android based tablets market and capture more than half of the US market for Android based tablets. Kindle Fire is equipped with Web surfing, e-reading and video streaming activities that most consumers want and Amazon hopes that the device sales will help to increase digital media sales to eventually contribute a larger percentage of revenues of Amazon total revenues and the device will also helps in connecting and transacting with consumers on various other fronts. According to a study conducted by RBC Capital analyst Ross Sandler of 216 Kindle Owners, Amazon can expect to make $136 per Kindle through the life of the tablet and e-book sales will contribute most of the part. Study also found that 80% of Kindle Fire owners bought an e-book, and 58% bought three or more e-books and Sandler believes that the average Kindle Fire owner will spend $15 per quarter on e-book. Over 60% of Kindle Fire owners bought an app, and almost 50% bought three or more and Sandler believes that Kindle Fire owners will spend $9 per quarter on apps for the life of the device.

With the Kindle Fire closely linked to Amazon’s online offerings of e-book store, movie and music service and a redesign of its shopping website to make it easier for mobile consumers, the Fire funneled users directly into Amazon’s “meticulously constructed world of content, commerce and cloud computing.” Kindle Fire has boosted Amazon revenues in first quarter 2012 and according to the company it remains the best selling, most gifted, and most wished for product on the site. Amazon also announced that in the first quarter 2012, 9 out of 10 of the top sellers on Amazon.com were digital products — Kindle, Kindle books, movies, music and apps and it highlight the importance of Kindle Fire, as it provides Amazon with a device to handle the shift from physical media products, like books, DVDs, video games and CDs, to digital versions of such content. The rise in North America sales of digital content where Kindle Fire is exclusively sold is another testimony of how Kindle Fire is going to drive sales of digital content and ultimately revenues in future. With such positive response Amazon is looking to add more digital content to its inventory and also looking to expand the sale of Kindle Fire in other countries. With more and more tablets being sold in future, Amazon can through its Kindle Fire and huge digital content inventory expects to increase the sales of both the device and content and significantly increase its revenues.