Organizational culture influences the behavior of organisations but as it is intangible it is difficult to define and understand. Organisational culture introduces unspoken rituals and tacit rules and addresses the actions, values, and behaviors, which, in combination, contribute to the overall philosophy and environment of the organisation.  It shapes the way in which employees behave and make decisions and is formed over time as a result of the experiences and values of the organisation and the way in which it reacts to internal and external circumstances.

A key role of organizational culture is to differentiate the organisation from others and provide a sense of identity for its members. Cultures do not have to be logical or consistent, in fact they seldom are and can appear quite haphazard and chaotic to the outsider. A strong culture is one that is internally consistent, is widely shared, and makes it clear what it expects and how it wishes people to behave. 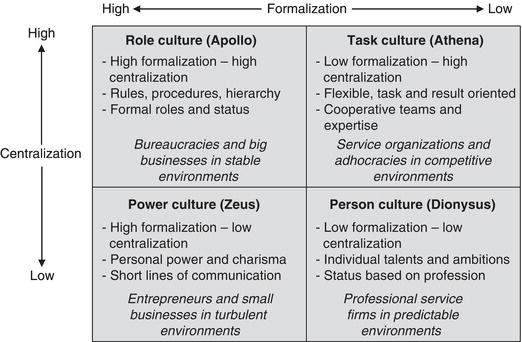 Role Culture: This is typically characterized by organisations which have a high degree of formalization and a high degree of centralization, such as bureaucracies or large stable businesses.  There are well established formal rules and procedures, and a well-defined organisational hierarchy which is clearly understood and tightly enforced.  The advantage of such a culture is that employees understand exactly what is expected of them, and there are well-defined processes and procedures to follow. The disadvantage of such organisations is that they can be much less adaptive and agile in a changing environment.  For especially large organisations, this may not necessarily be a very significant issue, but in some circumstances very large organisations have failed because of their inability to adapt.

Task Culture: These organisations are characterized by a high degree of centralization but a low degree of formalization. They are typically quite flexible and results orientated, and often work on a project basis.  Examples are likely to include specialist construction firms, or service firms such as architects. They respond well to a competitive environment, but do require individuals to be highly collaborative and communicative, and also be able to work well on their own initiative. Team dynamics are likely to be very important to the overall success of such a culture, which is also why it is important to understand how multicultural teams can influence organisational outcomes. It is not necessarily an ideal environment for those who like structure and regularity in their working day.

Power culture: A highly formalized organisation but often lacking centralization, such a firm is likely to have a highly charismatic leader who communicates directly with people and expects quick and agile responses.  Entrepreneurs are typically associated with this culture, as are small agile businesses capable of operating in a turbulent environment.  It is important to distinguish between entrepreneurial businesses and small family businesses, as they are not necessarily one and the same, and some family businesses can often become quite introspective finding it difficult to change their working ways.  The benefits of a power culture are that an organisation is quick and responsive, but the disadvantages are that it can be difficult to work for someone who is likely to have strong opinions and may well change their mind quickly, expecting others to keep pace.

Personal Culture: This is a culture lacking in formalization of centralization, and is likely to center on a work environment which is self-directed and status driven.  Professional services firms in stable and predictive environments such as accountancy or insurance benefit from this type of overall culture. Its advantages are that individuals operate on a self-motivated basis so need limited formal guidance or structure, but conversely it can be very difficult to marshal people in such culture as they are used to being self-directed, and can react badly to even small changes in rules and procedures.

Handy’s framework is also linked to the idea of visual representations of these cultures (and also as can be seen from the above figure, loose allocation to Greek mythology), and helps to provide an understanding of how different types of organizational culture physically manifested themselves in overall organizational structure and hierarchy.  Handy recognizes that in small organisations it is quite likely that culture will continue to be driven by the personality and/or preferences of particular individual managers or leaders, but in larger organizations culture will become self-replicating and self-reinforcing.  Critics of the framework suggest that it would benefit from being updated in modern more flexible working environments where established career patterns and organizational structures have less relevance.