The Harrod-Domar models of economic growth are based on the experience of advanced economies. They are primarily addressed to an advanced capitalist economy and attempt to analyze the requirements of steady growth in such economy.

Both Harrod and Domar are interested in discovering the rate of income growth necessary for smooth and uninterrupted working of the economy. Though their models differ in details, yet they arrive at similar conclusions.

Harrod and Domar assign a key role to investment in the process of economic growth. But they lay emphasis on the dual character of investment. Fist, it creates income, and secondly, it augments the productive capacity of the economy by increasing its capital stock. The former may be regarded as the ‘demand effect’ and the later the ‘supply effect’ of investment. Hence so long as net investment is taking place, real income and output will continue to expand. However, for maintaining a full employment equilibrium level of income from year to year, it is necessary that both real income and output should expand at the same rate at which the productive capacity of the capital stock is expanding. Otherwise, any divergence between the two will lead to excess or idle capacity, thus forcing entrepreneurs to curtail their investment expenditures. Ultimately, it will adversely affect the economy by lowering incomes and employment in subsequent periods and moving the economy off the equilibrium path of steady growth. Thus, if full employment is to be maintained in the long run, net investment should expand continuously. This further requires continuous growth in real income at a rate sufficient enough to ensure full capacity use of a growing stock of capital. This required rate of full growth may be called the warranted rate of growth or “the full capacity growth rate”. 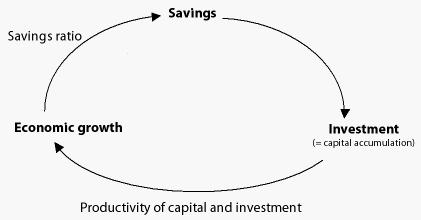 The model constructed by Harrod and Domar are based on the following assumptions:

All these assumption are not necessary for the final solution of the problem; nevertheless they serve the purpose of simplifying the analysis.

He answers this question by forging a link between aggregate supply and aggregate demand through investment.

Increase in Productive Capacity: Domar explain the supply side like this. Let the annual rate of investment be I, and the annual productive capacity per dollar of newly crated capital be equal on the average to s (which represents the marginal capital-output ratio). Thus the productive capacity of I dollar invested will be I.s dollars per year.

But some new investment will be at the expense of the old. It will, therefore, compete with the later for labor markets and other factors of production. As a result, the output of old plants will be curtailed and the increase in the annual output (productive capacity) of the economy will be somewhat less than I.s. This can be indicated as IÏƒ, where Ïƒ (sigma) represents the net potential social average productive of investment (Î”Y/I). Accordingly IÏƒ is less than I.s. is known as the sigma effect. In Domar’s word, “this is the increase in output which the economy can produce,” it is the “supply side of our system.”

Equilibrium: To maintain full employment equilibrium level of income, aggregate demand should be equal to aggregate supply. Thus we arrive at the fundamental equation of the model:

Solving this equation by dividing both sides by ‘I’ and multiplying by Î± we get:

This equation shows that to maintain full employment the growth rate of net autonomous investment (Î”I/ I)   must be equal to Î±Ïƒ(the MPS times the productivity of capital). This is the rate at which investment must grow to assure the use of potential capacity in order to maintain a steady growth rate of the economy at the full employment. Domer gives a numerical example to explain his point: Let Ïƒ = 25 per cent per year, Î± = 12 percent and Y = 150 billion dollars per year. If full employment is to be maintained, an amount equal to 150*12/100 = 18 billion dollar should be invested. This will raise productive capacity by the amount invested Ïƒ times, i.e., by 150*12/100*25/100 = 4.5 billion dollars, and the national income will have to rise by the same amount. But the relative raise in income will equal the absolute increase divided by the income itself, i.e,

Thus in order to maintain full employment, income must grow at a rate of 3 percent per year per annum. This is the equilibrium rate of growth. Any divergence from this ‘golden path’ will lead to cyclical fluctuation. When Î”I/ I is greater than Î± Ïƒ, the economy would experience boom and when Î”I/ I is less than Î± Ïƒ, it would suffer from depression.