In September 2008, Lehman Brothers filed for chapter 11 bankruptcy protection. The company became insolvent with finances totalling $639 billion in assets and debt worth $619 billion; it became the largest bankruptcy in history. The company employed 25,000 employees worldwide including 5,000 and was the fourth largest US financial bank at the time of the bankruptcy. It also became the biggest victim of the subprime mortgage disaster that had put the global financial sector into meltdown. 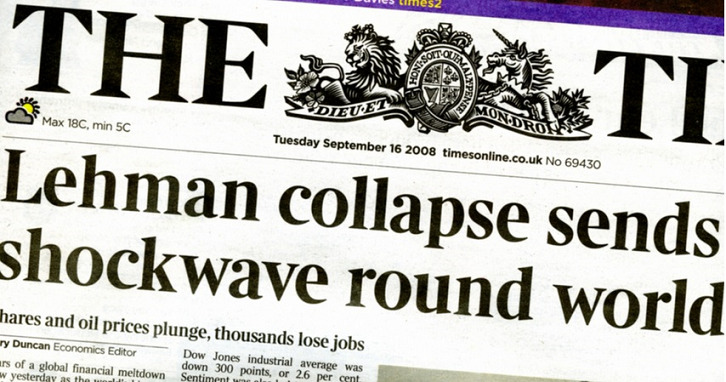 In 1844 23 year old Henry Lehman the son of a cattle merchant immigrated to the United States from Rimpar, Bavaria. He set up home in Montgomery, Alabama where he opened a dry-goods shop. In 1847, following the arrival of his brother Emanuel Lehman, the firm became “H. Lehman and Bro.” With the arrival of their youngest brother, Mayer Lehman, in 1850, the firm changed its name again and “Lehman Brothers” was founded.

The brothers expanded their dry goods store into a cotton business after noticing the potential the highly valued cotton had, even accepting cotton as a payment for products within their shop. Cotton trading became a key part of their business and they eventually relocated to New York, there Lehman became a member of the Coffee Exchange and then on to the New York Stock Exchange in 1887. In 1899, it underwrote its first public offering, the preferred and common stock of the International Steam Pump Company.

The company then went from strength to strength underwriting many companies and becoming a powerhouse in the financial industry, prospering through world wars, civil wars and the great depression but the US house market crash proved to be its undoing as greed and the need for higher profits led them to take the decision to invest heavily into the subprime mortgage market which led to its demise.

Subprime Mortgages are loans offered to customers who would not usually be accepted for credit due to a poor credit score. The loans often have higher interest rates due to the higher risk a company takes by lending to a subprime borrower. There are many types of subprime mortgage plans on offer, the most common is the adjustable rate mortgage (ARM) which at first charges a fixed interest rate and then switches to a floating rate plus a margin. ARMs can be misleading to subprime borrowers who jump at the chance to take out a mortgage they were previously denied. By charging lower rates at first the mortgages reined in borrowers but as their rates were reset to variable rate which were considerably higher than the rates the borrowers were previously paying and many could not offered the new payment requirements resulting in loan defaults.

During the boom Lehman were trading tremendously well and decided to invest in mortgage lending by acquiring five mortgage lenders, which included subprime mortgage lenders BNC Mortgage and Aurora Loan services which specialised in Alt-A Loans. Alt-A Loans are categorised between prime and subprime loans, Alt-A borrowers have clean credit histories but have limited documentation therefore occurring a higher risk, these borrowers proved very attractive to lenders as they could charge them higher interest rates than normal prime loans but were less risky than subprime borrowers.

Lehman Brothers acquisitions proved a success at first; record revenues from Lehman’s real estate businesses enabled revenues in the capital markets unit to surge 56% from 2004 to 2006, a faster rate of growth than other businesses in investment banking or asset management. The firm securitised $146 billion of mortgages in 2006, a 10% increase from 2005. Lehman reported record profits every year from 2005 to 2007. In 2007, the firm reported net income of a record $4.2 billion on revenue of $19.3 billion.

Lehman Brothers were still continuing to grow and in February 2007 stock reached a record $86.18, meaning Lehman had a market capitalisation of close to $60 billion. This masked the real problem as by the first quarter of 2007 defaults on subprime mortgages rose to a seven-year high. Investors started to have concerns that rising defaults would affect Lehman’s profitability, but the firm reported record revenues and profit for its fiscal first quarter. These concerns led to Lehman’s chief financial officer (CFO) insisting that the risks posed by rising home delinquencies were well contained and would have little impact on the firm’s earnings. He also said that he did not foresee problems in the subprime market spreading to the rest of the housing market or hurting the U.S. economy. This statement showed the company had become reckless and the prospect of higher profits and keeping investors happy became their main concern and as long as profits were good the strategy stayed the same.

Five months after Lehmans Brothers chief financial officers assurances that the company would be unaffected and safe from the housing problems the company’s risks seemed to be catching up with it. Lehman’s stocks fell sharply as two of Bear Stearns hedge funds failed, it caused them to shut down the BNC unit and cut 2500 jobs and also shut down some of its Aurora offices but as this may have been a sign of them cutting down their mortgage portfolio they continued to pursue the mortgage market becoming the major player gaining a portfolio of mortgage backed securities four times that of shareholder equity. The risk seemed to have paid off as their stocks increased and calm returned to the market, this was the opportunity to trim down their massive portfolio and release funds to secure against any losses the mortgage market may encounter by investing in other areas, however they seemed to choose to keep hold of the bulging portfolio.

Lehman Brothers leverage was a high 31 in 2007 which in tandem with its massive mortgage portfolio made it increasingly vulnerable to any change in the market. In March 2008 Bear Stearns struggles continued and confidence in Lehman was fading resulting in a drop in shares of over 40% and although they managed to increase confidence by raising $4billion dollars people were becoming increasingly worried about the size of the company’s high risk portfolio.

In June Lehman recorded a second quarter loss of $3billion but managed to keep confidence high by raising $6billion through investors and noticing the ticking time bomb they were sitting on boosted its liquidity pool to an estimated $45 billion, decreased gross assets by $147 billion, reduced its exposure to residential and commercial mortgages by 20%, and cut down leverage from a factor of 32 to about 25.

However, these measures were perceived as being too little, too late. On August 22, 2008, shares in Lehman closed up 5% (16% for the week) on reports that the state-controlled Korea Development Bank was considering buying the bank. Most of those gains were quickly eroded as news came in that Korea Development Bank was facing difficulties pleasing regulators and attracting partners for the deal. On September 9 Lehman’s shares plunged 45% to $7.79, after it was reported that the state-run South Korean firm had put talks on hold.

This caused the company’s hedge fund clients to pull out, while its short-term creditors cut credit lines. On September 10, Lehman announced shocking fiscal third-quarter results early that highlighted the feebleness of its financial position. The firm reported a loss of $3.9 billion, including a write-down of $5.6 billion as well as these shocking results Moody’s Investor Service dealt the company another blow as it announced that it was reviewing Lehman’s credit ratings, and also said that Lehman would have to sell a majority stake to a strategic partner in order to avoid a rating downgrade. These developments led to a 42% plunge in the stock on September 11.

With $1 billion left in liquidised assets, Lehman was quickly running out of time. Last-ditch efforts over the weekend of September 13 between Lehman, Barclays PLC and Bank of America, aimed at working out a takeover of Lehman, were unsuccessful. On Monday September 15, Lehman declared bankruptcy, resulting in the stock plunging 93% from its previous close on September 12.