Economic system refers to the organizations and institutions created for the purpose of satisfying the wants of human beings. In a country, available resources have to be utilized to manufacture and distribute goods and services, which would meet the needs of the people so that they are satisfied.   These institutions and organizations function with their own rules and regulations.

Answering these questions assumes enormous significance as that would determine every activity within a country. 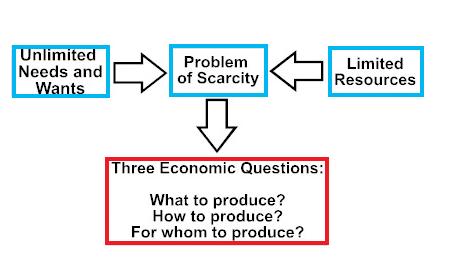 The first question ‘What to produce’ depends on what is wanted. The economic system would throw signals through which the requirements of the people could be understood. But not all wants could be satisfied. This is because; a country may not be gifted with all the necessary resources to produce all the goods. Hence, depending upon the resource endowment a country would decide what it could produce. Then there is a problem of prioritizing the available resources among the goods to be produced. Resources should not be used for the production of unwarranted goods. The production of goods, which are harmful to human beings, like narcotic drugs, should be prevented. Hence, considering the availability of resources, the economic system should opt to produce only goods that would satisfy the wants of human beings. In this context it is also necessary to weigh the individual requirements and the national requirements for goods. The latter should be given preference over the former.

The second question ‘How to produce’ addresses basically, issues relating to selection of right strategy, technology and investment. For example, a country like India, with very huge population should not prefer capital-intensive technology, as that would lead to more unemployment of human resources. Similarly, while selecting the technology, a country should weigh a number of considerations like relevance of technology, cost of technology, support in case of failures, consequences of the technology used, etc. Another vital aspect is the investment that a country has to make while selecting the strategy and the technology. A very important question is whether the available funds should be invested in sophisticated research and development or meeting the basic needs of the people. Hence, the second question would ultimately determine the efficiency with the available resources are utilized.

The third question  ‘For whom to produce’ implies that based on the resource utilization, the country as a whole should benefit and not a few segments. Hence, having produced the goods and services, how they could be equitably distributed is an important aspect. The distribution of national product would differ from country to country depending upon the economic system in vogue.

It has been already pointed out that the way in which the above three questions are answered depends on the economic system which functions in a country.