The following figure summarizes the sources of stress. 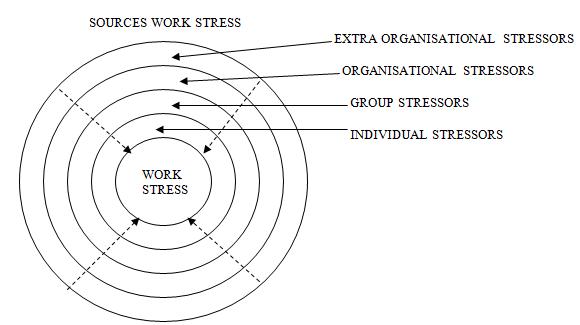 Job stress is not limited to things that happen inside the organisation, during the working hours. Extra organisational factors also contribute to job stress. These stressors include the following factors :

1. Political Factors. Political factors are likely to cause stress in countries which suffer from political uncertainties as in Iran, for example. The obvious reason is that the countries have stable political system where change is typically implemented in an orderly manner.

2. Economic Factors. Changes in business cycles create economic uncertainties. When the economy contracts, people get worried about their own security. A very important example is the great depression of 1930s. During this period, suicide rates touched the sky. Minor recessions also cause stress in the work force as downward swings in the economy are often accomplished by permanent reductions in the work force, temporary layoff or reduction in pay.

In organisations, there is no shortage of factors which can cause stress. Almost every aspect of work can be a stressor for someone. Although there are many factors in the work environment that have some influence on the extent of stress that people experience at the job, the following factors have been shown to be particularly strong in inducing stress :

1. Job Related Factors. Job related factors or task demands are related to the job performed by an individual. These factors include the following :

2. Role Related Factors. Role related factors relate to pressures placed on a person as a function of the particular role he or she plays in the organisation. Individuals can experience the following role related stresses :

3. Inter Personal and Group Related Factors. Interpersonal demands are pressures created by other employees. Group related stressors include factors like conflicts, poor communication, unpleasant relationship and fear of being ostracized from the group as a valued member.

Working with superior, peers or subordinates with whom one does not get along can be a constant source of stress. Some people can deal with conflicts and misunderstandings in an open way and resolve issues as they arise. Many, however, find it difficult to do this and build internal stresses for themselves. Moreover, lack of social support from colleagues and poor interpersonal relationships can cause considerable stress, especially among employees with a high social need. Sometimes, the individuals try to avoid these stresses by remaining absent as frequently as possible and even start looking for new jobs.

4. Organisational Structural Factors. Organisational structure defines the level of differentiation, the degree of rules and regulations and where decisions are made. Excessive rules and lack of participation in decisions that affect an employee are examples of structural variables that might be potential stressors.

5. Organisational Leadership Factors. These factors represent the managerial style of the organisation’s senior managers. Some managers create a culture characterized by tension, fear and anxiety. They establish unrealistic pressures to perform in the short run, impose excessively tight controls and routinely fire employees who fail to turn up.

6. Organisation’s Life Cycle. Organisations go through a cycle. They are established, they grow, become mature and eventually decline. An organisation’s life cycle creates different problems and pressures for the employees. The first and the last stage are stressful. The establishment involves a lot of excitement and uncertainty, while the decline typically requires cutback, layoffs and a different set of uncertainties. When the organisation is in the maturity stage, stress tends to be the least because uncertainties are lowest at this point of time.

Another source of stress in organisations is poor interpersonal relationships or conflicts. These conflicts can be among the members of the group or between the superiors and subordinates. Groups have a lot of influence on the employees’ behavior, performance and job satisfaction. On the other hand, the group can also be a potential source of stress. Group stressors can be categorized into the following factors. :

1. Group Cohesiveness. The famous Hawthorne studies had proved that group cohesiveness is very important to the employees, particularly at the lower levels of the organisation. Lack of cohesiveness can be very stress producing, especially for those persons who cannot thrive in isolation.

The other side of the picture is that too much cohesiveness can also lead to stress. Sayings like “Too much familiarity breeds contempt” is very valid because prolonged contact with other people can also cause stress. This stress becomes more intensified when the people we are close to or with whom we come in contact with are in distress themselves. For example, people tend to become distressed when their friends, colleagues or pears are in distress. Due to this reason people belonging to certain specific professions, which deal with the problems of other people have the highest level of stress.

2. Lack of Social Support. Satisfaction, though, a state of mind is primarily influenced by the positive external factors. These factors include friendliness, respect from other members and self respect, support, opportunity to interact, achievement, protection against threats and a feeling of security. In this type of social support is lacking for an individual, it can be very stressful.

3. Conflicts. People who are working in the organisations are prone to interpersonal and inter-group conflicts. As we have discussed in the previous chapter, conflict has both functional and dysfunctional aspects. Whenever conflict has dysfunctional consequences, it will lead to stress in all the concerned parties.

The typical individual works for about 8 to 10 hours a day. The problems and experiences which he has to face in the remaining 14 to 16 non-working hours can spill over to his work place. Our final category of stressors thus includes personal or individual stressors. Following are the main factors which can cause stress to individuals :

1. Job Concerns. One of the major job concern is lack of job security which can lead to concern, anxiety or frustration to the individual. The prospect of losing a job especially when you have a family and social obligations, is always very stressful.

Career progress is another reason of anxiety. This is particularly true for middle aged people, because middle age is a period of soul searching and self doubt. If these people were not given promotions when due or they feel that the jobs which were given to them were beneath their qualifications, they may become very anxious. This anxiety will lead to stress.

2. Career Changes. When an employee has to relocate geographically because of a transfer or promotion, it disrupts the routine of his daily life causing concern and stress. The relocation can lead to the following problems:

Uncertainty about getting a new job at the new location creates some degree of stress.

Thus, when a person is geographically relocated, his stress will depend upon how many changes occur in his social relationships and family life. More the changes, more will be the stress.

3. Economic Problems. Some people are very poor money managers or they have wants and desires that always seem to exceed their earning capacity.

When individuals overextend their financial resources, or in simple words, if they spend more than they earn, it will always cause stress and distract the employees from their work.

4. Changes in Life Structure. The life structure of a person changes as he grows older. As a person grows older, his responsibilities to himself as well as others change and increase. The higher the responsibility, the greater the stress.

5. The Pace of Life. As the responsibilities of a person increase, his capacity to execute them should also increase. A hectic pace of life when the person is always busy in business or otherwise can create more stress than a relaxed pace of life. Certain professions like teaching are less stressful than those of company executives, bankers or businessmen.

6. Life Change and Life Traumas. Life change and life traumas are both stress producing. Life changes may be slow (like getting older) or sudden (like the death of a spouse). Sudden changes are highly stressful. Life traumas can be highly stressful. A life trauma is any unheaval in an individual’s life that alter his or her attitudes, emotions or behaviors. Life change and life trauma look alike but there is difference between the two. To illustrate, according to the life change view, the death of a spouse adds to a person’s potential for health problems in the following year. At the same time, the person will also experience an emotional turmoil, which will constitute life trauma and life trauma will spill over to the work place.

Thomas Holmes and Richard Roke developed “Social Adjustment Rating Schedule” to assess the degree of stress created by certain events in life. In order to develop the scale of impact, they asked people to rate as to how long it would take them to adjust to certain stress producing events in life. After considering the responses of the people, they developed a ranking and weighing schedule for each of these stress producing events. The following table shows the ranking of these events along with the weights.

7. Personality of a Person. The extent of stress is also determined by the personality of a person. In respect of personality the distinction between ‘TYPE A’ and ‘TYPE B’ behavior patterns become relevant. As mentioned earlier, TYPE A personalities may create stress in their work circumstances due to their achievement orientation, impatience and perfectionism. TYPE A people, thus, bring stress on themselves. TYPE B personality; on the other hand, is less stress prone.

8. Ability to Cope. How a person is able to cope with the stress and the sources a person seeks to deal with stress are also very important. For example, people who have strong faith in God and his will find it easier to deal with stressful situations like the loss of a loved one. Similarly, family, relations and friends are a source of great comfort at such times of crisis.