Given the Isoproduct map, the producer would like to ride on the highest possible Isoquant because any point on it would yield maximum possible output. But the producer’s desires are limited by his budgetary constraints. Before he selects a certain combination of inputs he has to take into consideration the size of his investment outlay and the prices of the factors of production.

Let us assume that the investment fund is given and the prices of factors X and Y are also known. On the basis of these assumptions let us suppose that the firm were to spend the entire amount on employing units of only input X. Then it could hireOB units of factor X. On the other hand if the producer wants to allocate his entire investment outlay in employing factor Y then he could hire OA units of Y. We have now obtained the two extreme situations A and B.

When we join the points A and B we get the Isocost line. The Isocost line is so called because whatever be the combination of factor inputs we select at any point on this line we shall obtain that combination at the same total cost. Thus line AB is also called the equal cost line. 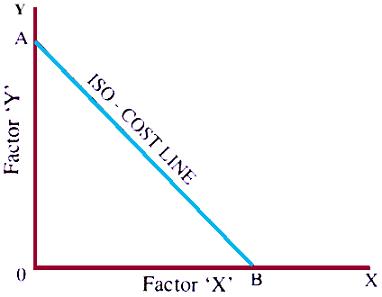 Thus, the producer is in equilibrium at the point of tangency between the Isocost line and the Isoproduct curve. This is the best possible point of factor combination within the budget constraints.