Decision Support Systems (DSS) help executives make better decisions by using historical and current data from internal Information Systems and external sources. By combining massive amounts of data with sophisticated analytical models and tools, and by making the system easy to use, they provide a much better source of information to use in the decision-making process.

While many people think of decision support systems as a specialized part of a business, most companies have actually integrated this system into their day to day operating activities. For instance, many companies constantly download and analyze sales data, budget sheets and forecasts and they update their strategy once they analyze and evaluate the current results. Decision support systems have a definite structure in businesses, but in reality, the data and decisions that are based on it are fluid and constantly changing. 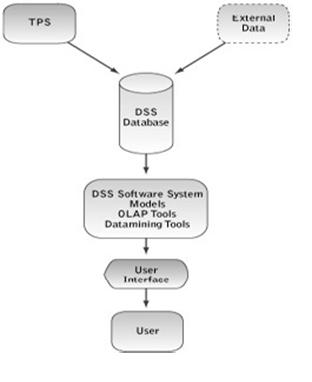 This traditional list of components remains useful because it identifies similarities and differences between categories or types of DSS. The DSS framework is primarily based on the different emphases placed on DSS components when systems are actually constructed.

Data-Driven, Document-Driven and Knowledge-Driven DSS need specialized database components. A Model- Driven DSS may use a simple flat-file database with fewer than 1,000 records, but the model component is very important. Experience and some empirical evidence indicate that design and implementation issues vary for Data-Driven, Document-Driven, Model-Driven and Knowledge-Driven DSS.

Multi-participant systems like Group and Inter-Organizational DSS also create complex implementation issues. For instance, when implementing a Data-Driven DSS a designer should be especially concerned about the user’s interest in applying the DSS in unanticipated or novel situations. Despite the significant differences created by the specific task and scope of a DSS, all Decision Support Systems have similar technical components and share a common purpose, supporting decision-making.

A Data-Driven DSS database is a collection of current and historical structured data from a number of sources that have been organized for easy access and analysis. We are expanding the data component to include unstructured documents in Document-Driven DSS and “knowledge” in the form of rules or frames in Knowledge-Driven DSS. Supporting management decision-making means that computerized tools are used to make sense of the structured data or documents in a database.

Mathematical and analytical models are the major component of a Model-Driven DSS. Each Model-Driven DSS has a specific set of purposes and hence different models are needed and used. Choosing appropriate models is a key design issue. Also, the software used for creating specific models needs to manage needed data and the user interface. In Model-Driven DSS the values of key variables or parameters are changed, often repeatedly, to reflect potential changes in supply, production, the economy, sales, the marketplace, costs, and/or other environmental and internal factors. Information from the models is then analyzed and evaluated by the decision-maker.

Knowledge-Driven DSS use special models for processing rules or identifying relationships in data. The DSS architecture and networking design component refers to how hardware is organized, how software and data are distributed in the system, and how components of the system are integrated and connected. A major issue today is whether DSS should be available using a Web browser on a company intranet and also available on the Global Internet. Networking is the key driver of Communications- Driven DSS.

Regulations like Sarbanes-Oxley often dictate reporting requirements and hence heavily influence the control information that is made available to managers. On a more ominous note, some DSS provide summary data about decisions made, usage of the systems, and recommendations of the system. Managers need to be very careful about how decision-related information is collected and then used for organizational control purposes. If employees feel threatened or spied upon when using a DSS, the benefits of the DSS can be reduced. More research is needed on these questions.

Decision Support Systems can create advantages for organizations and can have positive benefits, however building and using DSS can create negative outcomes in some situations.

In conclusion, before firms will invest in the Decision Support Systems, they must compare the advantages and disadvantages of the decision support system to get valuable investment.