Personality is a complex, multi-dimensional construct and there is no simple definition of what personality is. Salvatore R.  Maddi  defines personality as, “A stable set of characteristics and tendencies that determine those commonalities and differences in the psychological behavior and that may not be easily understood as the sole result of the social and biological pressures of the moment”.

All individuals have some universally common characteristics. Yet they differ in some other specific attributes. This makes it difficult for the managers to assume that they can apply same reward types or motivation techniques to modify different individual behaviors. The definition, however, does not mean that people never change. In simple terms, it asserts that individuals do not change all at once. Their thoughts, feelings, values and actions remain relatively stable over time. Changes in individual’s personality can, however, occur gradually over a period of time. The managers should, therefore, attempt to understand certain dimensions of personality. This can enable them to predict the behavior of their employees on a daily basis. 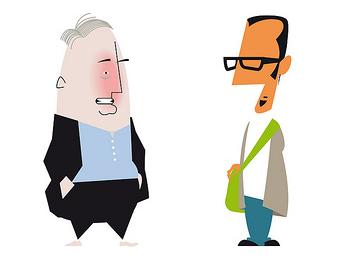 Some of the important personality factors that determine what kind of behaviors are exhibited at work include the following:

Steers and Braunstein in 1976 developed a scale for the four needs of personality that became apparent in the ‘work environment. They are as follows:

Locus of control is the degree to which an individual believes that his or her behavior has direct impact on the consequences of that behavior. Some people, for example, believe that if they work hard they will certainly succeed. They, strongly believe that each individual is in control of his or her life. They are said to have an internal locus of control. By contrast, some people think that what happens to them is a result of fate, chance, luck or the behavior of other people, rather than the lack of skills or poor performance on their part. Because- these individuals think that forces beyond their control dictate the happenings around them, they are said to have an external locus of control.

As a personality attribute, locus of control has clear implications for organizations. For example, certain individuals have an internal locus of control, which means they have a relatively strong desire to participate in the management of their organizations and have a’ freedom to do their jobs. Thus, they may prefer a decentralized organization where they have a right of decision-making and work with a leader who provides them freedom and autonomy. They may like a reward system that recognizes individual performance and contributions.

Conversely, people with an external locus of control, are likely to prefer a more centralized organization where they need not take any decisions. They may incline to structured jobs where standard procedures are defined for them. They may prefer a leader who makes most of the decisions and a reward system that considers seniority rather than merit.

Introversion is the tendency of individuals, which directs them to be inward and process feelings, thoughts and ideas within themselves. Extroversion, on the contrary, refers to the tendency in individuals to look outside themselves, searching for external stimuli with which they can interact. While there is some element of introversion as well as extroversion in all of us, people tend to be dominant as either extroverts or introverts. Extroverts are sociable, lively and gregarious and seek outward stimuli or external exchanges. Such individuals are likely to be most successful while working in the sales department, publicity office, personal relations unit, and so on, where they can interact face to face with others. Introverts, on the other hand, are quiet, reflective, introspective, and intellectual people, preferring to interact with a small intimate circle of friends. Introverts are more likely to be successful when they can work on highly abstract ideas such as R&D work, in a relatively quiet atmosphere. Since managers have to constantly interact with individuals both in and out of the organization and influence people to achieve the organization’s goals, it is believed that extroverts are likely to be more successful as managers.

This personality characteristic indicates the level of uncertainty that people can tolerate to work efficiently without experiencing undue stress. Managers have to work well under conditions of extreme uncertainty and insufficient information, especially when things are rapidly changing in the organization’s external environment. Managers who have a high tolerance for ambiguity can cope up well under these conditions. Managers, who have a low tolerance for ambiguity may be effective in structured work settings but find it almost impossible to operate effectively when things are rapidly changing and much information about the future events is not available. Thus, tolerance for ambiguity is a personality dimension necessary for managerial success.

Authoritarianism is the extent to which an individual believes that power and status differences are important within’ hierarchical social systems like organizations. For example, an employee who is highly authoritarian may accept directives or orders from his superior without much questioning. A person who is not highly authoritarian might agree to carry out appropriate and reasonable directives from his boss. But he may also raise questions, express disagreement and even refuse to carry out requests if they arc for some reason objectionable.

Dogmatism is the rigidity of a person’s beliefs and his or her openness to other viewpoints. The popular terms ‘close-minded’ and ‘open-minded’ describe people who are more and less .dogmatic in their beliefs respectively. For example, a manager may be unwilling to listen to a new idea related to doing something more efficiently. He is said to be a person who is close-minded or highly dogmatic. A manager who is very receptive to hearing about and trying out new ideas in the same circumstances might be seen as more open-minded or less dogmatic. Dogmatism can be either beneficial or detrimental to organizations, but given the degree of change in the nature of organizations and their environments, individuals who are, not dogmatic are most likely to be useful and productive organizational members.

9.  Type A and B Personalities

Type A persons feel a chronic sense of time urgency, are highly achievement-oriented, exhibit a competitive drive, and are impatient when their work is slowed down for any reason. Type B persons are easy-going individuals who do not feel the time urgency, and who do not experience the competitive drive. Type A individuals are significantly more prone to heart attacks than Type B individuals. While Type A persons help the organization to move ahead in a relatively short period of time they may also suffer health problems, which might be detrimental to both themselves and the organization in the long run.

Some individuals are highly work-oriented while others try to do the minimum Work that is necessary to get by without being fired on-the-job. The extremely work oriented person gets greatly involved in the job. Extreme work ethic values could lead to traits of “workahollism” where work is considered as the only primary motive for living with very little outside interests. For a workaholic turning to work can sometimes become a viable alternative to facing non-work related problems. A high level of work ethic orientation of members is good for the organization to achieve its goals. Too much “workahollism”, however, might lead to premature physical and mental exhaustion and health problems, which is dysfunctional for both organization and the workaholic members.

The above ten different personality predispositions are important for individual, managerial and organizational effectiveness.