The competitive advantage, a concept introduced by Michael Porter in 1985 has become one of the key concepts in management science today. A firm is said to have a competitive advantage when it is implementing a value creating strategy not simultaneously being implemented by any current or potential competitors.

Over the past 25 years, a large body of literature engaged in analyzing how organisations can achieve and, more importantly, sustain a competitive advantage. During this process, two different perspectives or ‘schools of thought’ emerged. The first school of thought is that an organization’s competitive ability depends more on the external environment and industry attractiveness. This perspective is referred to as the market based view and was largely triggered by Porter.  The second school of thought is based on the internal environment i.e. the fundamental attributes of an organisation, in terms of strengths and weaknesses determine a firm’s ability to compete. This perspective is called the resource based view and was introduced by Jay Barney. The resource based view argues that a competitive advantage depends on an organisations distinct resources and capabilities. The market based view argues that the source of a competitive advantage lies within the competitive environment that characterizes its external product market.

The Market-Based View of the Firm

The market based view argues that the success of an organisation is not determined by its internal characteristics, but depends on the environment it operates in. Hence, the organisation is regarded as a ‘black box’ and the opportunities for a sustained competitive advantage lie within the industry structure. Industry here refers to a group of firms producing a similar good or service. The underlying assumptions of the market based view are that resources are homogeneous and perfectly mobile.

The theory of the market based view originated from Mason and Bain (1950) who link the structure of an industry to a firm’s success in the so-called Structure-Conduct-Performance-Paradigma. They argue that the key factors for the success of an organisation are entry barriers, number of players in the market as well as the elasticity of demand. In 1980, Michael Porter further developed this idea in his book ‘the competitive advantage’, which is one of the cornerstone literature’s in management science today. In his work, Porter introduces a framework of so-called ‘five forces’, that determine the rivalry within an industry, as well as three ‘generic strategies’ that organisations can adopt to be successful. In his ‘five forces’ framework, Porter asserts that four main drivers in the industry structure determine the attractiveness of, as well as the competitive rivalry within an industry. 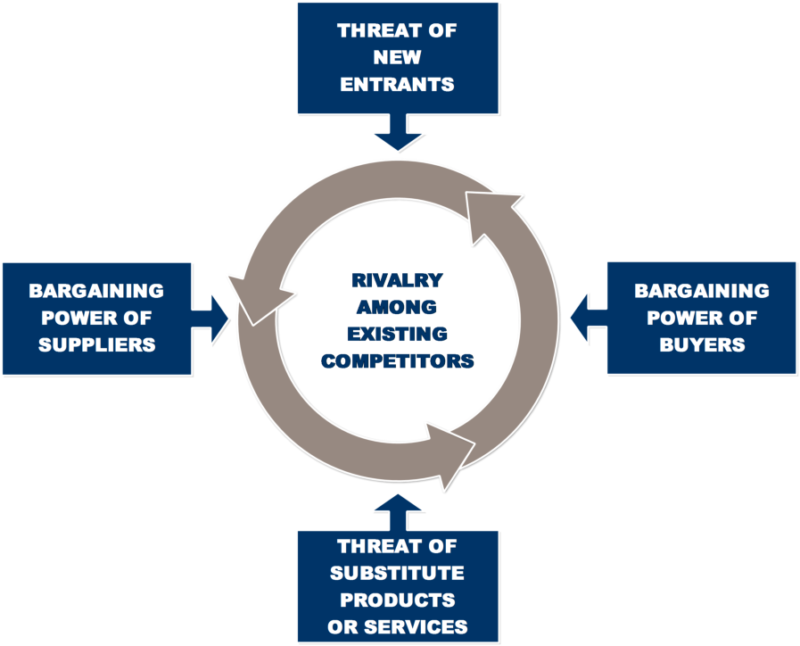 The five forces of Porter apply to any market, domestic or global. The forces influence prices, costs and required investments as well as the return on investment (RoI) of a firm. The bargaining power of buyers influences the price a firm can charge for a good or service. The bargaining power of suppliers affects the costs of raw materials and other inputs and hence determines production costs. The threat of new entrants depends on the investment required to access the market, e.g. the aircraft industry has extremely high entry barriers due to its capital intensity, whereas opening a restaurant has relatively low barriers to entry. The threat of substitutes depends on how easily products in an industry can be substituted and the probability of the industry products becoming obsolete due to technological innovation. These forces determine the intensity of rivalry within an industry and therefore, the industry attractiveness. In an industry where these forces are strong, and rivalry is high, it is much more difficult for organisations to operate than if they are weak. The strength of these forces can vary between industries and over time. 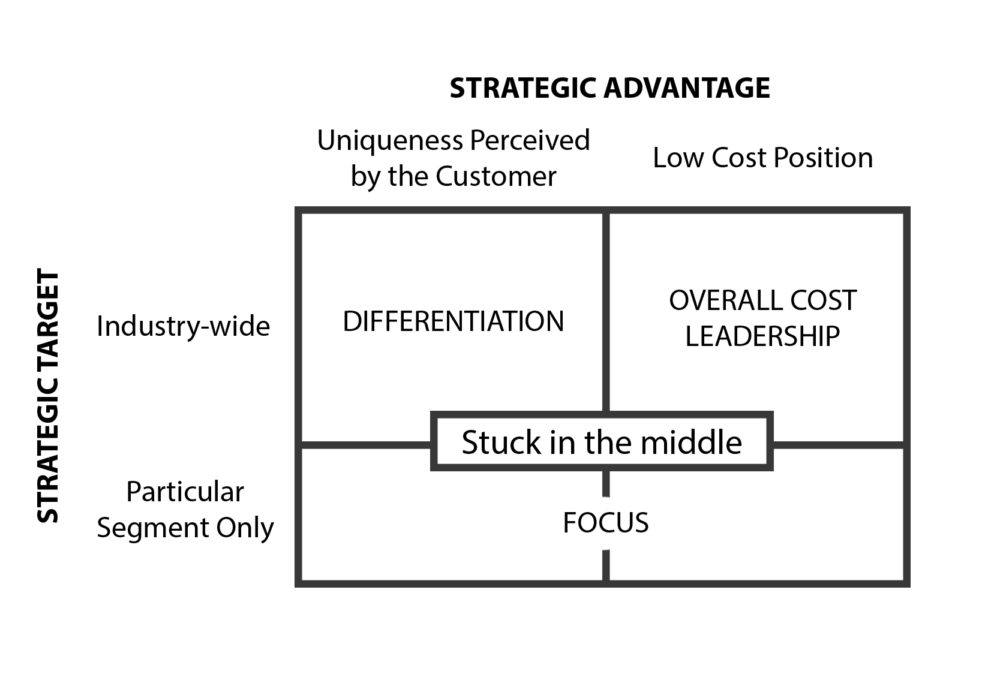 Porter argues that it is essential to follow one of these strategies in order to be successful. Firms that do not implement this and engage in more than one strategy are referred to as “stuck in the middle“.

Hence, the two key factors to achieve a sustainable competitive advantage according to the market based view are the attractiveness of an industry (intensity of rivalry) as well how an organisation positions itself within the industry structure. This competitive positioning explains why some firms are more profitable than others. Through their choice of strategy companies can improve or erode this position. Therefore, to achieve a sustained competitive advantage the market has to be analysed to realize the perfect market fit. Porter summarizes this argument by saying “competition is at the core of the success or failure of firms.”

A criticism of this school of thought is that it is a one-sided view, which only includes the structure of the industry but excludes the operations within a firm. Furthermore, the access of resources can vary within one industry and not all resources are homogenous.

The Resource-Based View of the Firm

No product is viable without generating positive economic value, thereby implying that extra value must be created out of its inputs. While extra value is necessary, it is not sufficient to achieve a positive profit. Profit requires the value to exceed that of its competitors because under the assumptions of perfect competition, prices will be driven down, up until only normal profits are being made. The Resource Based View (RBV) explicitly looks for the sources to achieve a sustained competitive advantage in the internal environment of an organization and thereby, the factors that cause profits to vary. It then aims to explain why firms in the same industry might differ in performance.

It is important to highlight that the resource based view focuses on how a sustained competitive advantage can be achieved by the means of the internal resources rather than the external environment. Hence it aims to explain differences in the performance of organisations within the same industry, based on differing internal resource endowments.

In order to understand the resource based view, one must first define what is meant by resources. Firm resources include all assets, capabilities, organizational processes, firm attributes, information, knowledge, etc. controlled by a firm that enable the firm to conceive of and implement strategies that improve its efficiency and effectiveness. Hence resources can be both, tangible or intangible. That means they can be of physical (a factory), human (an employee), or organizational nature as well as also be included in what is referred to as a firm’s capabilities. In contrast to the market based view, the resource based view assumes a firm’s resources to be heterogeneous and imperfectly mobile and scarce.

The following examples will illustrate the assumptions: Scarcity, imperfect mobility and heterogeneity are necessary to ensure sustainability. For instance, a resource that is simply scarce, such as a superstar athlete for a football team, could simply be hired by another club. His wage will keep increasing until a competitive advantage is no longer generated. Imperfect mobility implies that resources cannot sell themselves to the highest bidder meaning that the case previously mentioned is avoided. In practice this can be created by firms through non-competition clauses in contracts. Another example for resource immobility are co-specialized resources which are simply not worth as much when used outside very specific resource combinations, e.g. Delta landing slots at Atlanta Airport and its long standing customer loyalty in the region.

The central proposition of the resource based view is that, for a firm to a achieve a state of sustained competitive advantage, it must acquire and control valuable, rare, inimitable and non-substitutable (VRIN) resources and capabilities, plus have the organization (O) in place that can absorb and apply them.  Let us now consider the attributes prescribed as necessary for resources by the RBV in turn:

The value of managers within the resource based view is the determined by their ability to estimate the future value of a resource more precise than competition, thereby providing the firm with an ex ante source of sustained competitive advantage. Similarly, isolating mechanisms provide an ex post source of sustained competitive advantage. Isolating mechanisms explain why resources cannot be imitated well enough by other firms to compete with the firm that possesses the valuable resource. This includes factors such as causal ambiguity (when the source of the competitive advantage is unknown). This is more likely to occur when the resource in question is knowledge based or socially complex.

The resource based view addresses one crucial shortfall of the market based view by removing the assumption that the strategies firms pursue and resources they control are identical. The market based view on the contrary assumes that should resource heterogeneity exist, it will be short lived as resources are mobile (can be bought and sold in factor markets). While those assumptions were useful in analyzing the external environment, it should now be obvious that with the assumptions of resource immobility and heterogeneity, the resource based view addresses a completely different and arguably more realistic direction.