Serious doubts have been expressed about the existence of the five distinct need categories, which Maslow hypothesized. There seems to be some overlapping between esteem, social, and physiological needs. Also, the lines between esteem, social, and self-actualization needs are not entirely clear. With these points in mind, Clayton Alderfer condensed Maslow’s five need categories into three sets: 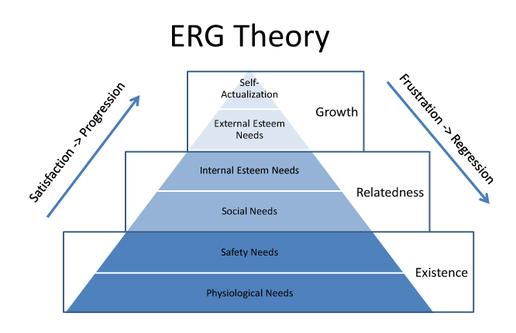 Alderfer conceived of ERG needs along a continuum which avoids the implication that the higher up an individual is in the hierarchy the better it is. Different types on needs can operate simultaneously. If a particular path towards the satisfaction is blocked, the individual will both persist along that path and at the same time regress towards more easily satisfied needs. In this way, Alderfer distinguishes between chronic needs, which persist over a period of time, and the episode needs, which are situational and can change according to the environment. Alderfer’s work gives up a sound basis to categories of human needs and to think about the relationship between need categories.

There are some similarities as well as dissimilarities between Alderfer’s ERG theory and Maslow’s theory of Need Hierarchy, which are as follows:

Similarities: (i) both are content theories; (ii) the basic needs emphasized in both are the same; (iii) the overall structure of need categories is also the same; Alderfer has grouped further the five needs enunciated by Maslow; and (iv) both deal with upward movement of motivation according to the hierarchy.

Dissimilarities: (i) Maslow’s main contention is hierarchy of needs, whereas Alderfer focused more on a continuum of needs than their hierarchical levels; (ii) thus, ERG needs do not maintain sharp lines of demarcation; (iii) unlike Maslow, Alderfer also envisaged downward movement in the hierarchy. In his opinion, there can be not only satisfaction progression but frustration regression as well; and (iv) Alderfer also recognized the influence of a man’s personal background and his natural environment. Accordingly, related needs may in some cases take precedence over existence needs.

(i) Alderfer’s concept of needs is more direct and simple to understand; (ii) it is more flexible and therefore, more realistic. In the words of Fred Luthans, “most contemporary analyses of work motivation tend to support Alderfer’s ERG theory over Maslow’s”; (iii) the provision of backlash of fulfillment of a need accords with reality; and (iv) there is a specific method indicated in the theory for its testing and validation.

The fact that the needs are not strictly demarcated goes against the theory. Probably this is one of the important reasons for lack of popularity of Alderfer’s ERG theory. The term ‘relatedness’ used in the theory is particularly confusing; and like other content theories, it fails to contribute effectively to human resources management.