The unique thought patterns, behaviors and feelings that make an individual different from the other can be termed as Personality. The personality of every individual originates out of genetic heritage as well as his immediate surroundings, and remains constant all through their lives. This results in individual differences. Due to complexity in human nature arising out of the wide variety of experiences in life, the different personality types affect individual relation ships in an organization, and affect the organizational climate. However, though it is assumed that the personality of an individual is more or less constant, it does not happen so. It has been observed that though individual differences occur as a result of various styles of parenting and the amount of attention that one received in childhood grooming, individual successes and failures experienced in life, changes in individual personality do occur in the long run. Individuals are likely to become more stable emotionally through 20 to 40 years, where usually they do not need to face any more new experience with age, as greater confidence in self develops.

Impact of Individual Personality at Work

The child hood personality of an individual affects the future career and job satisfaction of individuals. It has been found out that, behaviors of individuals in the organizational climate are the result of their individual personalities. There are certain traits of personality that are essential for employee behavior, which may be desirable for an organization to run its operations successfully. Some individuals may be more sociable and carry an outgoing personality and prefer work environment that is more social and friendly. This personality trait does not immediately affect their behavior at work, but might harm their work psychology in the long run. In an organizational environment, everyone is assigned some particular job responsibility, and certain expectations arise out of the definite roles that each are assigned to play. Hence, here the individual behavior is influenced more by the job expectations rather than individual behavioral preferences. In jobs that call for autonomy and freedom, it has been observed that the individual personality exercises a tremendous influence on that. This often leads to difficult management situations in an organization. Employees often tend to become too much egocentric, autonomous, possess too much of differential opinion, and sometimes casual and easy going. Hence these are important issues that need to be focused on when an organization is creating its business plan and designing individual job responsibilities.

People are not a means to an end, but are as important to an organization as the wheel is to a chariot. Every organization requires a definite workforce comprising a unique employee personality, so as to avoid too much collision of ideas. Again, individual differences give rise to dynamism in the team, which is very healthy and essential for the successful growth of a team, as it unleashes new ideas, provided it is managed efficiently. Thus it is important that every team leader has a proper knowledge about the Big Five Theory of personality development.

The discovery of the Big Five was the result of an empirical research, and psychologists observed that of the long list of traits prepared by them, many of them occurred together. Five big factors were identified as general dimensions that were essentially considered for differentiating one person from the other. These are – Openness, Conscientiousness, Extraversion, Agreeableness, and Neuroticism. Putting the initials of the character traits together, the acronym OCEAN is derived. 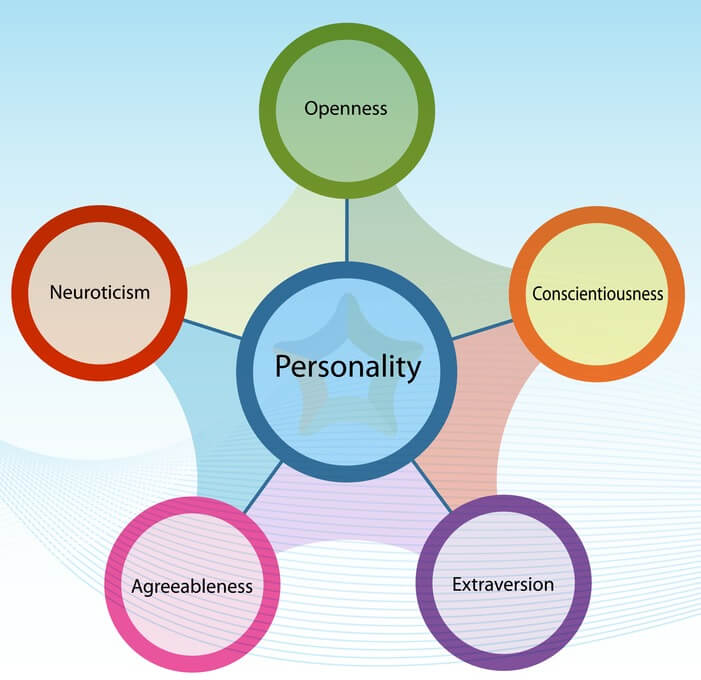