Why is this there a difference? Porter explains that there are four factors responsible for such diversity. He calls those factors the “diamond of national advantage”. The Porters diamond model includes: 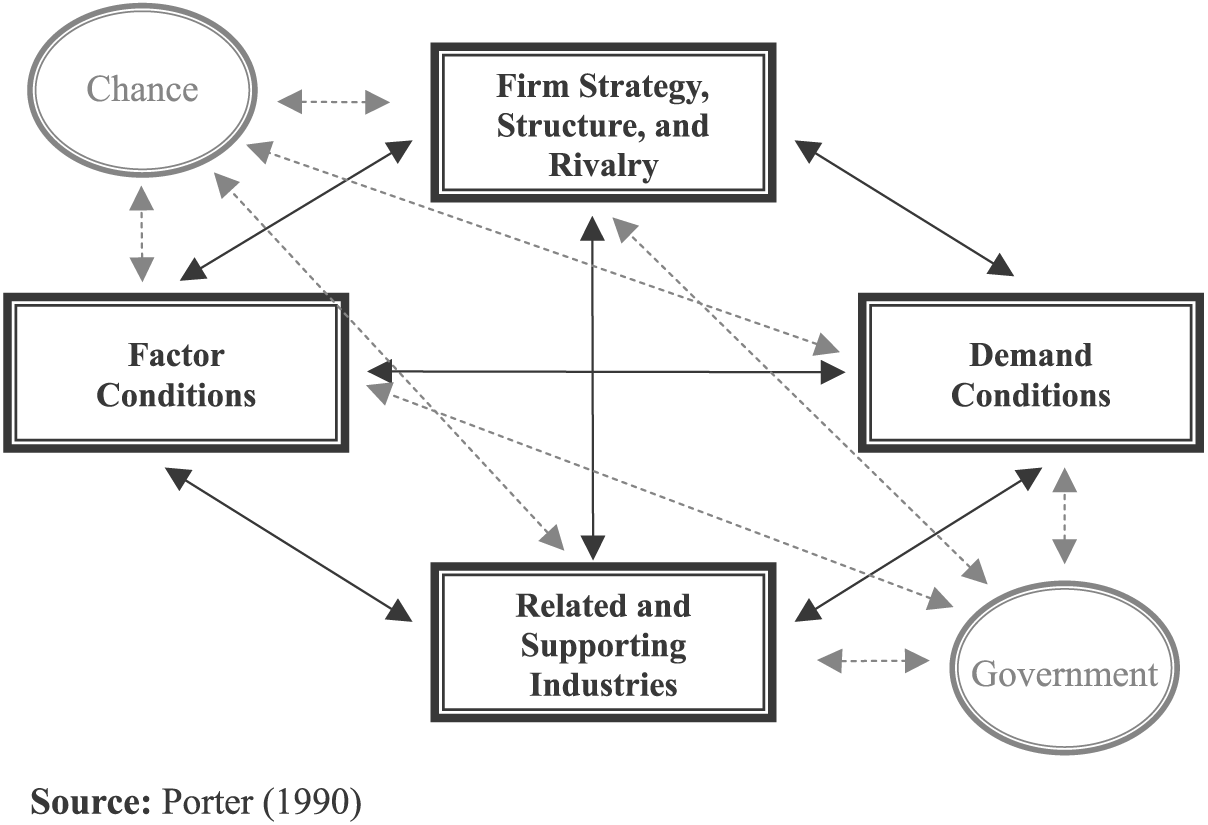 Factor conditions show how far the factor of production in a country can be utilized successfully in a particular industry. This concept goes beyond the factor proportions theory and explains that availability of the factors of production per se is not important, rather their contribution to the creation and upgradation of product is crucial for competitive advantage. If one says that Japan possesses competitive advantage in the production of automobiles, it is not simply because Japan has easy access to iron ore, but because the country has skilled labour force for making this industry competitive.

Secondly, the demand for product must be present in the domestic market from the very beginning of production. Porter is of the view that it is not merely the size of the market that is important, but it is the intensity and sophistication of the demand that is significant for competitive advantage. If consumers are sophisticated, they will make demands for sophisticated products and that, in turn, will help the production of sophisticated products. Gradually, the country will achieve competitive advantage in such production.

Thirdly, the firm operating along with its competitors as well as its complementary firms gathers benefit through a close working relationship in form of competition or backward and forward linkages. If competition is acute, every firm will like to produce better quality goods at a lower cost in order to survive in the market. Again, if there is agglomeration of complementary units in a particular region, there may be strong backward and forward linkages. All this will help attain national competitive advantage.

Fourthly, the firm’s own strategy helps in augmenting export. There is no fixed rule regarding the adoption of a particular strategy. It depends upon a number of factors present in the home country or the importing country and it differs from time to time. Nevertheless, the strategic decisions of the firm have lasting effects on their future competitiveness. Again, equally important is the industry structure and rivalry among different companies. The greater the rivalry, the greater the competitive strength of the industry.

Besides the four factors, Porter gives weightage to a couple of factors, such as governmental policy and the role of chance of events. Governmental policy influences all the four factors through various regulatory/deregulatory measures. It can control the availability of various resources of change the pattern of demand through taxes and so on. It can encourage/discourage supportive industries through various incentives/disincentives. Similarly, chance of events, such as war or some unforeseen events like inventions/innovations; discontinuities in the supply of inputs; and so forth can eliminate the advantages possessed by competitors.